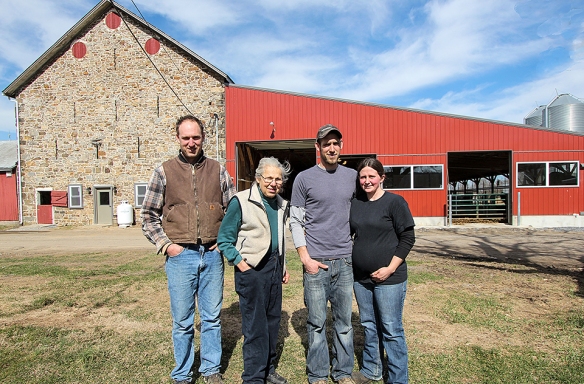 Naomi and her late husband Marlowe Stutzman started the dairy at Lehi Creek Farm in 1972, but dairying goes back four generations in the Stutzman family previously in Bucks County. Today, Naomi operates the farm with her sons Mike and Matt and Matt’s wife Steph.

“I’m glad not to have more of the same. I was tired of patching and making do and always being at the back,” she reflects. “I never thought we would have something like this, and I’m amazed at how it works. I like not having to be here at a set time to get all these cows milked!”

The Stutzmans started milking robotically on November 2, 2015. The cows are up in milk by 10 to 20 pounds at 85 to 88 pounds/cow/day, milking voluntarily 2.9 times per day with the Astrea 20.20 robot. The herd has grown from 65 to 80 cows, on its way to 110, which will be handled with just one robot serving two boxes — keeping the per-cow cost of the new facility and technology within their reach. 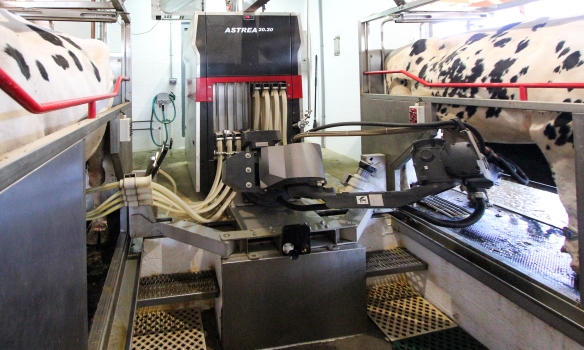 Milk quality has also improved with SCCs consistently around 200,000. Mike observes fewer cases of mastitis, as the cows are in new quarters with top-notch ventilation, automatic scrapers, improved cow comfort, and getting milked more often now on a voluntary basis.

Mike and Matt trace the start of their farm’s modernization to 2005, when they built the new heifer barn. Penn State extension educator and engineer Dan McFarland came out and helped them site that barn. He looked at the space taken up by the old earthen manure lagoon and made suggestions.

In 2008, Naomi lost her husband Marlowe in a tragic car accident. She expresses her gratefulness that she and her sons made it through those tough times and were able to continue operating the dairy farm.

By 2013, the Stutzmans were working with NRCS to put in a raised tank to reduce the manure storage footprint while at the same time improving environmental quality.

“That’s when we started really planning for the future,” says Matt.

“The buildings, the parlor, everything was worn out, and we had no air quality in there,” Naomi recalls. “Dan McFarland came out again, and he gave us good advice. We also had Tim Beck help us with the evaluation for the financial side. They helped lead us in a good direction.”

At first, they were going to build a parlor, but that would have brought the addition out into the yard. Then, a year ago they decided to go robotic. Matt and Steph had attended Corner View’s open house, and then pursued the Astrea further during Ag Progress Days.

This decision allowed the Stutzmans to begin expanding their herd internally to an eventual 100-110 cows on the same footprint of the worn out barn, building and milkhouse they had previously for just 60-65 cows. 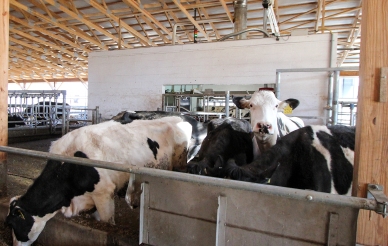 They chose the Astrea because they liked the idea of one robot serving two boxes. “We were impressed by the availability of parts and service and the support system of the Technical Services Center,” Mike observes. That’s where he and Matt trained before the robot was installed.

Naomi is quick to credit God and the advice of helpful consultants: “It’s only through God’s grace that we were able to work out the details better than I could have imagined.”

Last summer, the old buildings were torn down, except for the 200-year-old stone barn, which was converted from freestalls to house the new office, utility room, milk tank and equipment room. The robot barn was built around it, with the rear of the existing structure opened up for a well-ventilated dry cow area. When cows are ready to calve, they move across the feed alley to calving pens adjacent to the robot room. 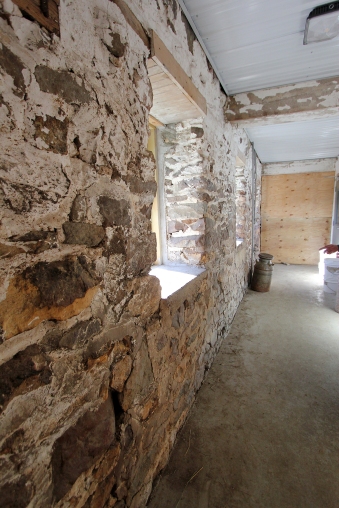 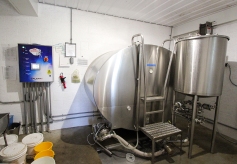 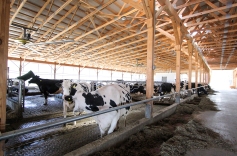 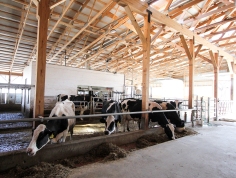 While construction was underway, they were still able to milk their cows. “E&F Ag Systems was great to work with as a contractor. They organized it so the milking parlor was the last thing torn down. They built the robot barn addition right up to that point,” Naomi explains. “We kept the cows out on pasture and walked them to the parlor, eight at a time, for milking.”

That is, until Nov. 2, when the parlor and milk house were torn down and the robotic system was fired up.

By the time the spring grazing season is underway, the cows will have been confined to the new barn the prerequisite six months, and the Stutzmans will then activate the auto-ID gate to allow cows access to outside pasture. The gate will be programmed to control cow flow so that a cow can only go outside after she has milked.

The robot is already programmed to keep a minimum five-hour interval between milkings.

With her sons taking care of the feeding, bedding, repairs, maintenance and fieldwork, Naomi does all the breeding and Steph helps wherever she is needed, including herd health and heifer care. Everyone pitches in to keep the automated smart technology humming on auto-pilot.

The cow identification system includes activity monitors, along with information from the robot on milk deviations and conductivity.

“The first two weeks, I came out here with my notebook and wrote everything down,” Naomi says, admitting she had no computer experience. “I don’t use the notebook any more. I can pull up the reports I need and work right from the computer. It’s freeing.” 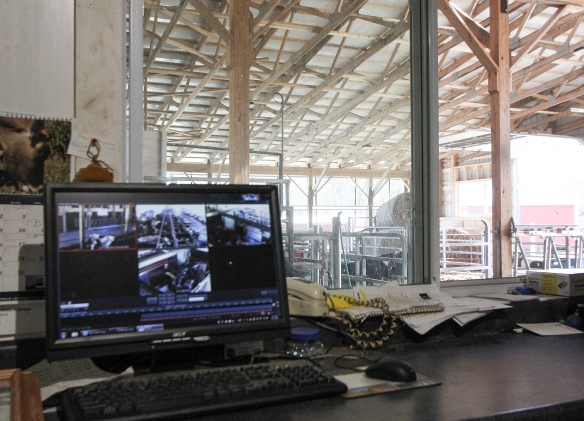 Mike and Matt like the “dashboard” feature of the Saturnus 20.20 TIM. This total farm automation software integrates all aspects of the facility and the cattle care and performance. The program allows them to set the lights, curtains, doors and fans to operate automatically with the weather.

On the dashboard, they can see, at a glance, the feeding, activity, milking performance, and attention list. Naomi concentrates on the cows in heat and Steph looks at the attention list. They also get reports on their phones, which Matt and Mike appreciate when they are out doing fieldwork.

The brothers admit it was “mind-boggling” while training before the robot was installed, but now they see how it all works together. Mike does maintenance and repairs and says it’s important to fix a problem when he sees it and not to let it go.

“We have gotten to know everyone at Lancaster Dairy Farm Automation and AMS-Galaxy-USA. They are easy to work with and were here for two weeks for our start up,” says Matt.

“It took just a couple days for the cows to realize there’s feed in the robot room, and two weeks to a month to settle into their own routines,” said Steph. “We probably fetched more cows than we needed to in the beginning. The attention cows are the only ones we go out and get now.”

As the herd grows into its new facilities, Mike and Matt have incorporated more spring forages into their double-cropping. They grow corn silage and alfalfa, and have added triticale and wheatlage as forage extenders.

“Before, we were milking twice a day for three hours, and scraping and feeding. Now everything gets done faster and better,” says Mike. “We are advancing our skills through technology, and the cows are much calmer.”

“We are still out here, but the work is different,” adds Matt. 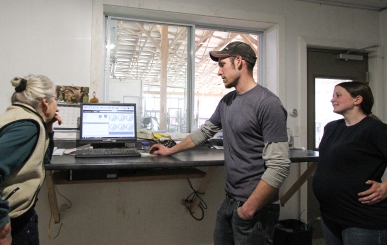 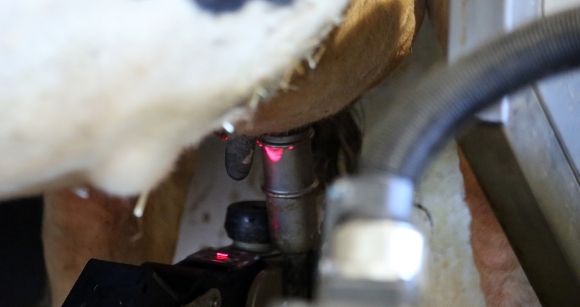 In the AMS-Galaxy-USA Astrea 20.20 robotic milking setup, the cow on the left is milking simultaneously while the cow on the right is being prepped by the single robotic arm serving both milking boxes. Its only job is to prep the udder and attach the teatcups, which then detach automatically on their own, one at a time into sanitizing cupholders, followed by a separate pop-up spray-wand that applies the post-dip. The manual-attach option is easy for doing fresh cows and attention cows. Photos by Sherry Bunting

Naomi Stutzman and her sons Mike (left) and Matt and his wife Steph, operate Lehi Creek Farm, where a new robotic facility was built around their 200-year-old stone barn for 110 cows. An open house is planned for April 7.

This lazer gives a whole new meaning to the term ‘red eye.’ All day, all night it locates teats for prepping and attachment!

Matt and Mike Stutzman like the way the Saturnus 20.20 TIM software provides reports and a dashboard screen where they can see at a glance how the herd and facility are doing.

Cows are calm and associate the robotic arm with feed flowing into the dish as prepping and milking begin.

Milk cows, calving pens and robot room are on the left, and the dry cows and utility rooms are on the right, still utilizing the 200-year-old stone barn in the modernization.

Cows in front have finished milking and are drinking at the trough while two of their herdmates milk simultaneously with one robotic arm in the background.

Naomi Stutzman shows an older photograph of the farm before the new manure storage and modernized robotic milking facility were completed.