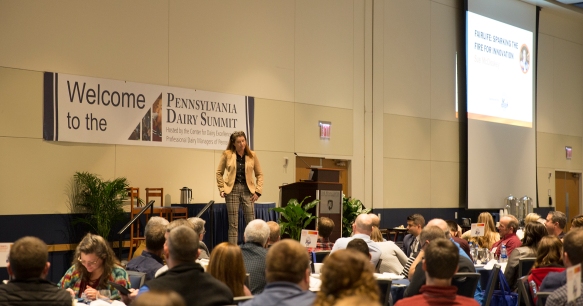 STATE COLLEGE, Pa. — The big question Sue McCloskey gets about fairlife is “How did you think of it?”

As co-founder with her husband Mike of Select Milk Producers, Fair Oaks Farms and the fairlife brand, McCloskey spoke about “the spark of innovation” to a crowd of over 500 at the 2020 Pennsylvania Dairy Summit in State College last Thursday, Feb. 6. She was among the featured speakers that were sponsored by ADA Northeast.

“We are all innovators in agriculture,” said McCloskey, telling how they learned of reverse osmosis when a well on their New Mexico dairy backed up 25 years ago, and RO membranes were used to separate solids to restore water quality. That experience introduced them to the concept of filtering solids by molecular size, but her larger message was about the concept of innovation in allowing companies to differentiate in a generic category like milk.

For example, she said, who would think, years ago, that water would become the multi-billion-dollar industry that it is today? And coffee? She cited Starbucks as a catalyst for the rise of coffee houses and coffee drinks and blends today.

As in these examples, someone was the first innovator to bring value to those generic categories. She said for milk, the parallel is fairlife.

“Innovation – thinking outside the box — that’s what grabs people,” she said.

McCloskey maintains that as consumers, “We are all waiting for the next new thing. We want more. We want new. That’s where we have seen success with fairlife.”

McCloskey talked about her husband’s journey from being a dairy veterinarian to a dairy producer and innovator. They started with 300 cows in California and a partner they still have today in Tim DenDulk. One by one they bought dairies, fixed them up and rolled them over.

Once they got to New Mexico with a 3000-cow dairy, that was the real beginning of it, she said. That’s where they founded Select Milk Producers 25 years ago, which is today the sixth largest cooperative on a milk volume basis with 99 members.

They formed to focus on high quality milk with low somatic cell counts and to sell that concept direct to retailers instead of being part of a co-op that commingled their milk to blend-down the somatic cell counts. That’s where they were introduced, she says, to the concept of what has become fairlife through the use of RO membranes to ultrafilter the milk. She explained that the milk going in must be very low in somatic cell counts because the process of ultrafiltration concentrates the solids – including somatic cells.

She pointed to the “incredible success” of building different plants and beginning to build the fairlife brand, which led them to their next opportunity in the Midwest – Fair Oaks Farms.

When the McCloskeys came to Indiana, DenDulk, their original partner in California, was already in Michigan.

McCloskey said the housing technology had developed by that time to where they felt they could do larger dairies in the Midwest climate. They built the first of the original four 2800-cow dairies in 1999. Today, there are 13 separate dairies totaling over 36,000 cows that are owned and managed by a few families on the roughly 30,000 acres, including the new 800-cow robotic dairy that opened at the end of 2019.

In fact, she spent part of her time talking about the innovations coming out of Fair Oaks to recycle and recover nutrients and to address greenhouse gas emissions to improve the “sustainability” and carbon footprint of dairy.

“There are cool things happening and things we are doing that we really need to embrace,” she said. 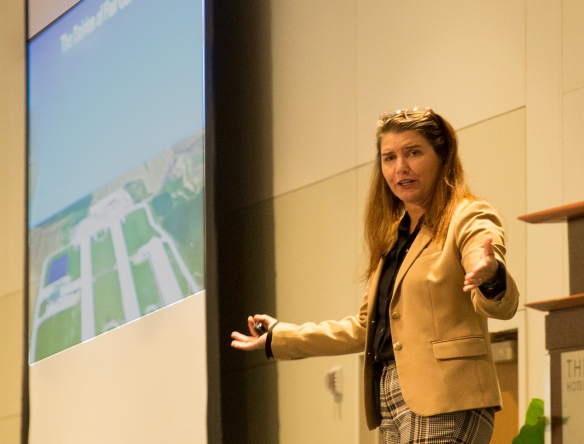 (Sue’s husband Mike, who spoke in March at the PDPW virtual business conference on U.S. Dairy’s goals for GHG emissions, was the first chairman of the Sustainability Initiative when it was launched under DMI’s Innovation Center for U.S. Dairy in 2009-10, and the checkoff’s research and development and marketing assistance for fairlife and Fair Oaks came from DMI through the Innovation Center where such partnerships are born.)

Establishing fluid milk supply relationships with large retailers like H-E-B and Kroger, McCloskey said they have worked over two decades to move closer to consumers as they began using RO and ultrafiltration as early as 1995 to reduce the water moving loads of milk to cheese plants, while at the same time beginning the high protein, low sugar milk proposition partnering with H-E-B in Mootopia in 1996, before what is fairlife today.

They saw other protein drinks in the market they could compete with – by concentrating the protein in milk.

So began the process of building the brand from coast to coast as new products have been added continually. While most people are familiar with fairlife ultrafiltered milk, the CorePower fitness recovery drink was among the first that was created as a competitor for Muscle Milk.

Today, there are flavored Yup drinks, snack drinks that pair ultrafiltered milk with oats and honey, new coffee creamers, and a full line of weight management and healthy lifestyle products that are just emerging under the fairlife brand.

While Select Milk Producers sold its remaining half-interest in fairlife to its early partner Coca-Cola a few weeks ago, McCloskey remains a spokesperson for the brand. Also, the research and development teams remain intact and are still located in Chicago.

What Coca-Cola did for fairlife, said McCloskey, is to provide a nationwide distribution network that the Select co-op could not have achieved on its own.

“The hardest thing in consumer goods is to get a product in front of the people who want to buy it,” said McCloskey. “Our challenge was distribution. So, we formed a partnership with Coca-Cola. With Coca-Cola as 100% owner of fairlife, what happens now is that they are just going to run with it.”

This means that, “Milk is in the spotlight. While we hear the bad news from Dean’s and Borden, the good news is that the Coca-Cola, a top-five company, is involved in milk,” said McCloskey.

With an ultrafiltration plant producing fairlife in Michigan, she explained that the east coast and midwestern markets could be served and that the new Select plant in Arizona will serve the west coast market. A plant is also being built in Canada.

Answering a question about whether fairlife, or this direction of milk innovation, would ever “play ball” with the smaller average size farms in Pennsylvania, she replied that any milk supply for fairlife must be very low in somatic cell counts and will have to meet with flying colors all of the new levels of audits and animal welfare requirements that Select Milk Producers and Coca-Cola have implemented since the undercover animal abuse video at McCloskey’s original farm at Fair Oaks this past summer.

She said the fairlife story shows “there is still room for investment and innovation in milk, innovation that makes milk relevant to consumers.”

McCloskey explained how the ultrafiltration process raises the protein and calcium levels, removes the lactose and reduces the natural sugars in milk without adding anything. 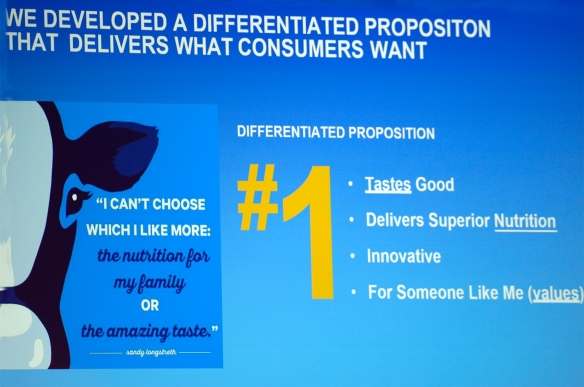 “And it is still real milk… but better,” she says, explaining that fairlife is finding “amazing growth in differentiation,” that fairlife’s entire proposition to consumers is the concept of  “believe in better.”

“Our core tenets of the master brand are better taste, better nutrition, and better values,” she said.

“The brand is created around values, and these values are not new, but they are done in a way that is a little more creative to today’s consumers.”

She explained that Select Milk Producers sends milk that goes into a jug at Krogers and sends milk to fairlife, “but it’s the innovation and sharing the values that leads to growth.”

While fairlife’s ultrafiltration process is patented, McCloskey said a dozen new products have come on the market since fairlife that use similar technology or other means of delivering high protein, low sugar outcomes.

This allows these products to differentiate themselves next to the gallon of milk as a generic staple, she explained.

“If someone is on food stamps and can’t afford these new products, that’s okay,” McCloskey said. “They can buy milk. People will still buy milk.” 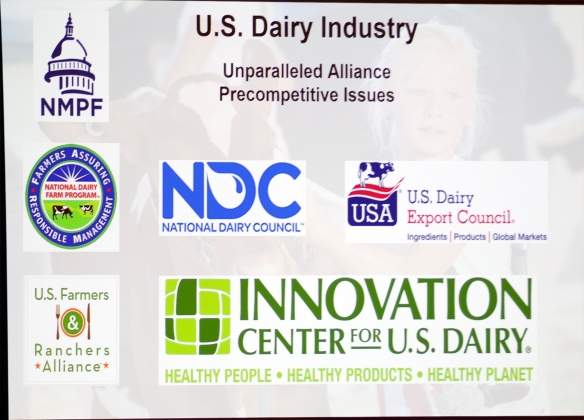 McCloskey stressed the “tremendous value checkoff organizations bring to dairy farmers to promote how to innovate dairy and make it better.”

She explained the next phase, how DMI is sitting down with young urban-suburban consumers to “learn how they make food choices, to learn what they look for. This is leading us into sustainability and carbon footprint,” said McCloskey.

“We also sit down with the different NGO’s (like World Wildlife Fund for example). We all sit at the table and talk about the challenges that face dairy farmers,” said McCloskey. “The Net Zero Initiative coming out of that is one of the coolest things, and we are a collaborator on what is needed for dairy to get to net zero. It’s a big stake in the ground, but it’s got to be the place where we need to go.”

She explained the Net Zero Initiative under DMI’s Innovation Center for U.S. Dairy has a catalog of technologies to help producers deal with environmental issues.

“What if 37,000 dairy farmers could have net zero greenhouse gas emissions? This is what we have to chase,” she said. “The innovation can’t stop. The whole genome of the dairy cow has been mapped. Manure can be fractionated. There is innovation that is so exciting for us to think about what dairy can look like in the future.”

McCloskey said the innovation from fluid milk to cheese to fractionating protein into “all kinds of other products” — while reducing the overall dairy carbon footprint — is the road to 2050. 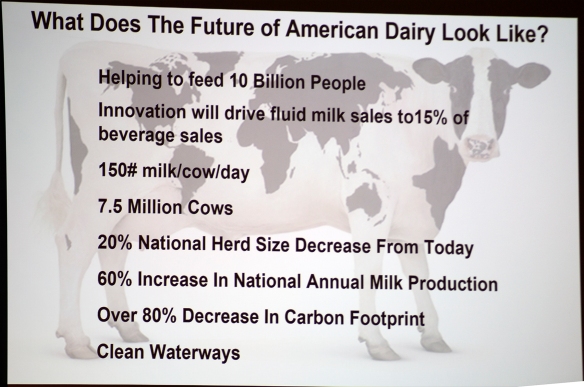 “We have only begun to know milk’s power and the different vitamins and elements we are just discovering how to use and extract,” she said.

“And it all happens in nature’s perfect laboratory – the dairy cow.”

On the flip side, McCloskey acknowledged that DMI has also learned consumer choices come back to this bottom line:

“It’s got to taste good and it’s got to do something for me,” she noted. “This is why dairy is not going away. Dairy is real and it tastes great and it makes you feel good.”