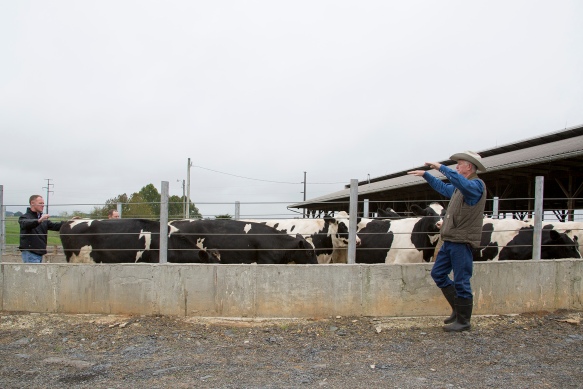 Dr. Hoglund talks about raising hands from below eye level to above the eye level of the cattle to add a little energy to create movement, while emphasizing the importance of using only the amount of energy needed.

MARION, Pa. — When Josh and Brandi Martin attended their first low-energy cattle handling and stockmanship clinic with Dr. Don Hoglund, Josh wondered what he could learn. After all, he works cattle every day at the family’s farm where they milk 1000 cows and raise dairy replacements as well as beef cattle in Franklin County, Pennsylvania.

Josh and Brandi Martin attended a previous clinic and learned so much they organized one as a refresher at their farm for themselves and their neighbors.

“I learned a lot, and it surprised me,” he told a dozen fellow dairy producers, employees and industry representatives at a two-day workshop organized at Martin Farms Oct. 15-16.

“There’s no magic in animal handling,” said Dr. Hoglund, who stated there’s also no definition for “emotion” because emotion is cognitive and requires language.

He focused on the observable behavior of animals and how humans and animals learn from their interactions.

“But we can observe and measure their behavior and responses,” said Dr. Hoglund, whose educational, vocational and life experiences span decades as a veterinarian, animal behaviorist, animal trainer (including for Walt Disney Company), researcher, educator, evaluator and text book author on the subject.

A scientist with decades of experience, Hoglund stressed the importance of observing behavior, not emotion and of using specific words in conversations with consumers to convey behavior that can be observed instead of emotion, which is a guess.

As we soon found out, Hoglund’s clinics are not your run-of-the-mill stockmanship workshops. He teaches science-based and practical approaches to human and animal interaction – challenging the conventional wisdom.

“I’m not here to tell you how to handle your cattle, but rather to show you how animals learn, and how you learn affects how your animals learn,” he said.

Part of the two-day cattle course at the Martin farm involved having producers do techniques in training and handling to the point where they can teach someone else and accomplish important aspects of various farm owner and employee certifications.

The fascinating aspect of the clinic was evident in how both the people and the cattle demonstrated observable behaviors that showed they were both learning.

“We are seeing a revolution in the neurosciences,” said Dr. Hoglund, explaining that we really don’t know why animals run.

“They run because they can,” he said. “There’s more than one reason why animals run, so instead of why, we should be looking at ‘when’ they run. Look at when a behavior occurs, not guessing why. You know what the cattle are doing and when they are doing it.”

He demonstrated a primary example on dairy farms.

“A dairy cow faces you all of her life. That’s how we feed and interact with her growing up. But for milking, she faces away from you and has to turn her head to see you,” Hoglund explains. “We can teach animals to calmly face away so they are ready for the parlor.”

He explained his techniques as “low-energy handling” — using just the amount of energy it takes. Preferring to speak in terms of “energy” versus “stress,” Hoglund said a key is for cattle handlers to learn to manage their own energy levels relative to the cattle.

Dr. Hoglund instructs pairs of participants in the heifer pens at Martin Farms as the teach heifers to calmly “face away.”

“When we start doing things in the blind zone, early, we are training the cattle to handle this calmly,” he said. “Everyone is told to stay out of the cow’s blind zone, but that’s where all the milking work is done.

“How about we train her to accept that?”

In the heifer pens, attendees, working in pairs, put the principles into practice according to Hoglund’s instructions getting the heifers to learn “facing away” behavior and “see human go to food.”

It was interesting to see how quickly they settled-in to be orderly as they learned “facing away,” and how their handlers learned to step away once they got the animals where they wanted them to go.

“Your energy drops and the animal learns. That’s what we’re after, the learning,” said Hoglund. “Cattle are in the business of learning to stay alive. They will go the efficient way and that helps you get more of the milk you are investing in.

“When we work with cattle in low-energy, then we have them in the parlor in low-energy,” he explained, adding that calm behavior is observable where the term “relaxed” is a feeling term, and therefore unknown.

“We want to talk and think about these things as behavior and not emotion. Behavior is anything you can observe,” he explained. “We are teaching others to teach animals to go calmly and to face away from us.”

The biggest thing for clinic attendees was to come away doing enough to be able to teach others at their own farms. After working in a heifer pen, participants had the opportunity to ‘train’ another clinic participant.

Throughout the handling, Hoglund said that trotting is okay, but that if the animals begin to lope, that’s not what you want.

The exercises in teaching cattle to accept “facing away” are something producers or employees can do 15 minutes a day for three days in a row and get results and then periodically refresh, according to Hoglund.

“It’s not really animal handling or stockmanship, it’s animal learning,” he observed. “The animals are learning to accept compression, and the people learn to slow down, be safe, and manage themselves to use only the energy required to accomplish the task. As we lower the energy, we reinforce the learning.”

He acknowledged that it’s tough for handlers to learn when to step back. “That’s one of the hardest things to learn, but also the most important.”

Low-energy handling starts with hands at sides. For safety reasons, he advised participants not to put them down in their pockets but to thumb their pockets and keep the hands out in case they need them.

“We add energy to move them by moving our hands from below the eye level of the cattle to above the eye level to raise the energy,” Hoglund explained.

Bred heifers calmly eat at the bunks watching some of their pen-mates ‘learn’ calm parlor entry through a makeshift chute.

While working in the heifer pens at the Martin farm, Hoglund explained that, “Heifers learn through all five senses. To know where an animal is looking, look at her ear, not her eye. She can see two things at once, so the ear tells you more.”

This is important information for producers and employees to avoid raising the energy level in a pen.

Hoglund made the case that these techniques are also important from an economic standpoint. Citing work he has been involved with in Minnesota, he said it takes 20 minutes for a cow to get rid of that adrenaline rush from a high-energy handling.

“That 20 minutes can hold back two and a half to three pounds of milk in the next milking,” he said, adding that cattle remember “where” things happen and don’t regain the milk lost.

“These techniques will help you get the milk you’ve already invested in,” said Hoglund, explaining that  “animals repeat what they learn, and for the people working with the animals, seeing gives information but doing is learning.”

This was just one aspect of the two-day clinic and the tip of the iceberg in terms of Dr. Hoglund’s work and the services and education he provides to universities, organizations, companies and especially hands-on to groups of producers and employees on farms.

Look for more tips from this clinic in the future, and to learn more about Dr. Hoglund and his work, visit https://www.dairystockmanship.com/