Harrisburg Dairies, Schneider’s Dairy step up for milk from at least 9 of 42 dropped Pa. farms

(Author’s note: Farmers whose milk has been displaced in 8 states are in various stages of determining their futures. Some are exiting the dairy business, a few have been picked up by cooperatives, or as in the case of this story, by processors. Some are resorting to marketing milk with brokers at much lower prices. In addition to PA Preferred, Tennessee’s legislature is working on a state label for milk.)

BROWNSTOWN, Pa. — In the days following the “Save Pennsylvania Dairy Farms” town hall meeting in Lebanon March 19, some breakthroughs came for 9 of the 42 Pennsylvania farms notified by Dean Foods that their contracts will end May 31.

Harrisburg Dairies, based in Harrisburg, picked up 5 (possibly 9) of the 26 farms let go by Dean’s Swiss Premium plant in Lebanon.

Schneider’s Dairy, based in Pittsburgh, picked up 4 of the 16 farms let go by the Dean plant in Sharpsville.

Both Harrisburg Dairies and Schneider’s Dairy source their milk through direct relationships with local family farms, and they use the PA Preferred logo on their milk labels, signifying it was produced and processed in Pennsylvania, which also means the state-mandated over-order premium paid by consumers is passed back through the supply chain.

“It really made the decision for us, when it came to needing our milk supply to be independent producers that we can have a direct relationship, monitor and inspect ourselves,” Alex Dewey told abc27 News, Harrisburg about the PA Preferred label and their decision to add five of the displaced farms to their Pennsylvania-sourced milk. Dewey is the assistant general manager of Harrisburg Dairies.

Likewise, Schneider Dairy president William Schneider told Clarion news that, “We really didn’t need the milk, but… these people were going to lose their livelihood. I didn’t want people to be out on the street, so we did what we could.”

Both dairies appear to have chosen their 4 and 5 farms based on hauling routes and proximity to their respective plants.

In addition, producers affected by these notices in Indiana, Kentucky, Tennessee and the Carolinas are also currently still seeking markets. A few in the Southeast have made plans to sell, but overall, there are still about 100 dairy farms displaced by Dean’s system-wide consolidation and Walmart’s new plant coming on line in May in Fort Wayne Indiana.

Some other marketing factors are emerging.

For example, the Dean Sharpsville plant continues to notoriously bring in loads of milk from Michigan. The company confirms that the 90-day notices sent Feb. 26 to over 100 dairy farms in 8 states, did not include Michigan.

The Sharpsville plant was referenced specifically in the December Pennsylvania Milk Marketing Board (PMMB) hearing where the Pennsylvania Association of Milk Dealers and Dean Foods requested a significant reduction in the producer over-order premium to its lowest level in 17 years. This change to a 75-cent mandated premium went into effect for wholesale and retail milk price minimums January 1.

At the time of the hearing, both John Pierce and Evan Kinser of Dean Foods testified that retailers are getting accustomed to bargain-priced milk elsewhere with documented retail milk prices offered to consumers in other states as low as 87 cents per gallon. Kinser testified that this new reality made Pennsylvania’s high state-minimum retail milk price an increasingly attractive destination for milk bottled elsewhere.

Kinser had further testified that the pressure from the increasing influx of out-of-state milk was making it difficult for milk produced in Pennsylvania to compete for retail (and apparently farm level) contracts.

Kinser also indicated that the mix of milk sourcing at the Sharpsville plant, in December, was already much different than the mix at the Swiss Premium plant in Lebanon. With Sharpsville close to the Ohio and New York borders, the plant has been sourcing milk from Ohio and New York for some time, but also increasingly from Michigan and Indiana.

In fact, at the December PMMB hearing, Kinser’s much-redacted testimony warned of Pennsylvania milk becoming displaced and that the new and lower 75-cent over-order premium level is “already a compromise that represented the highest level the current economic conditions can sustain.”

Kinser warned that if the premium were any higher than 75 cents, Dean Foods would be forced to renegotiate its contracts with suppliers to change the mix of milk used at ALL of its plants within the state in order to compete for contracts with packaged milk coming into the state from plants beyond Pennsylvania’s borders.

Even though the PMMB granted Dean’s request to lower the mandated premium to 75 cents, it appears the mix of milk is being renegotiated anyway as part of the company’s milk supply chain consolidation process as the volume adjustments at Pennsylvania plants have fallen primarily onto Pennsylvania farms.

Also emerging in the marketplace is the increased occurrence of brokered milk. This trend began in 2013 as producers across the Northeast and Mideast have dealt with contract losses in the fluid market at smaller levels than seen today.

Great Lakes Milk Producers is an example of a recently organized group of producers from Ohio, Michigan and Indiana, which is organized “like” a cooperative but markets milk as single-source loads through a broker.

Part of the drill is getting the milk qualified with farm audits and certifications as single-source loads that can be matched up to spot needs from cheese and yogurt plants to even, at times, the Dean plant in Sharpsville, Pennsylvania, the Southeast in the summer, and potentially even the new Class I Walmart plant in Fort Wayne.

Marketing through a broker can mean a long haul in a long market with changing conditions. This option makes milk quality a mandate without a premium.

As 27 farms in Indiana continue to seek a market, it is unclear whether brokering with Great Lakes Milk will become an option. The size of the displaced Indiana family dairy farms fits the single-source criteria, ranging 300 to 1500 cows and collectively represent an estimated 20 million pounds per month of displaced milk volume let go by a Dean plant in Indiana as well as Louisville, Kentucky.

“This is a huge issue for our state right now with an overwhelming impact,” said Indiana Dairy Producers executive director Doug Leman at a recent annual meeting in Indianapolis about the 27 farms with displaced milk scattered around the state. “Conversations are starting to happen, and we are planning a meeting for these farms. But just because Dean is not buying this milk, does not mean that the consumer demand has gone away. We have to let the dust settle and go through the milk shuffle.”

Among the recently affected Indiana farms is the sixth generation Kelsay Dairy Farm, operated by brothers Joe and Russ Kelsay and milking nearly 400 cows near Whiteland.  Joe Kelsay was the milkman for last year’s Indy500.

“We are exhausting all contacts and connections with cooperatives and plants,” said Kelsay in a phone interview. “Several told us they are not in a position to take any additional milk, some are doing some checking, and we do have a couple meetings scheduled. We are cautiously optimistic.”

When asked if the new Walmart plant will pick up any of the Dean dropped farms, Leman said the plant’s supply has been locked up with a percentage coming from undisclosed dairies doing contracts directly with Walmart and the balance being single-source loads via third parties.

“We can’t tell Walmart where to get the milk, but we are letting them know to check with these farms,” said Leman. “Some are within 50 miles of the plant.”

Kelsay doesn’t blame either Dean or Walmart for the market loss his family and others are experiencing. “This is a difficult time, but we can’t fault one company or another for doing their best to run their businesses,” he said.

But Dean has indicated its problem with excess volume will begin before these contracts end.

“We explored all our options before we made this decision,” noted Reace Smith, Dean Foods director of corporate communications. “At this time, we can’t extend the contracts further. As a fluid milk processing company, we are unable to store milk long-term.”

The timing is difficult with spring flush and spring decisions around the corner.

“We’re all in limbo right now,” said Agri-King nutritionist Bob Byers in a phone interview. He works with 25 farms, serving in the affected area of western Pennsylvania for 20 years. He notes that affected farm families have only so much time to make decisions like what crops to plant, what fuel and supplies to order. These decisions revolve around whether or not they will be milking cows after May 31.

“There is a timeline involved to unwind a multi-generational dairy farm with inventories of cows and feed and with a team of employees to think about,” says Kelsay. “If there is no one to purchase our milk, how can we continue? What happens here has a significant impact on our team of employees, and their families, as well as our hauler, nutritionist, equipment and feed suppliers – our whole web of contacts. We do a lot of business with a lot of people.”

Byers notes that this is the worst of times in the dairy business that he has seen in his 20 years and that it definitely affects local jobs and businesses. 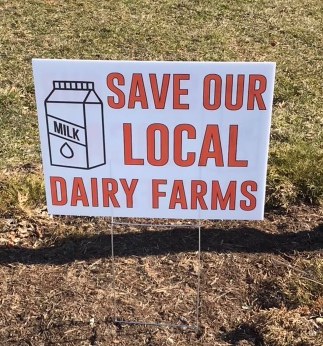 “Local people want local milk,” he said. “That is the only thing that will help these local farms at this point. Media attention will help get that message in front of consumers, and in front of companies like Walmart.”

Alisha Risser of Lebanon posted this photo of Harrisburg Dairies’ milk displaying the PA Preferred label signifying the milk was produced on Pennsylvania farms. The Rissers were part of a town hall meeting in Lebanon reported in last week’s Farmshine, and they are one of five farms whose contracts were dropped by the Dean Swiss Premium plant in Lebanon that will be picked up by Harrisburg Dairies.