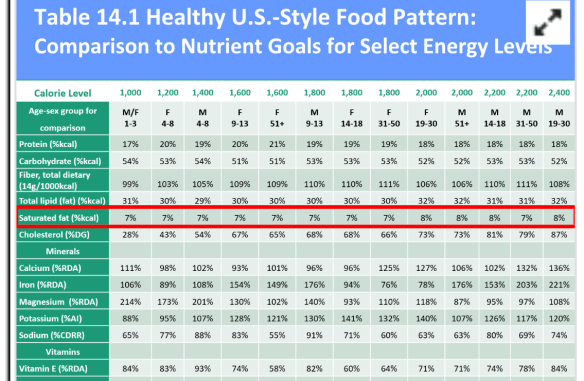 After 7 hours of subcomittee presentations, in an online virtual format, covering all facets of the 2020-25 DGAC ‘expert’ report, it was hard to choose which of the many eyebrow-raising moments was most concerning. In fact, DGAC comments were at times actually humorous, if this was not such a serious matter.

That’s the mentality. No need for cholesterol, which is essential for every single cell in the body and especially important in hormone synthesis, not to mention brain function. But, then again, the DGAC never was happy about giving up those cholesterol caps in 2015, especially since the anti-animal agenda of noted DGAC vegetarian leanings have found they need more than saturated fat caps to hang their hats on — especially since the 2020 DGAC included toddler food patterns in their report for the first time.

That discussion was also perplexing. No less than a full hour was spent going through every diet formulation the subcommittee could conjure up in order to get toddler food patterns closer to a “healthy vegetarian diet”, the one of three currently government-approved dietary patterns favored by the DGAC, now being recommended for children UNDER 2 years of age.

Each combination of foods they walked through (because the new way of presenting these patterns is to have actual foods listed to avoid) had them facing a big dilemma. Within the amount of calories a toddler will consume, there was no way to deliver the nutrients they need for life without more animal protein foods. In each case, the toddler patterns did not provide all the essential nutrients needed for brain development, growth, and health.

Iron was just one of them. When it was pointed out by one DGAC member that animal protein delivers absorbable iron — critical for toddlers — unlike a handy-dandy supplement pill, vegan-leaning Linda Van Horn from the saturated fat committee chimed in with a bizarre comment. She said it was not a concern because research she couldn’t put her fingers on at that moment suggests vegetarian adults have the ability to absorb more iron from supplements and other foods, so, she said, “kids of vegetarian parents could have this ‘accelerated absorption’ capability from their parents.”

Another committee member politely suggested that, yes, there is research showing vegetarians absorb more iron from supplements and other food sources “because they are deficient in iron in the first place.” 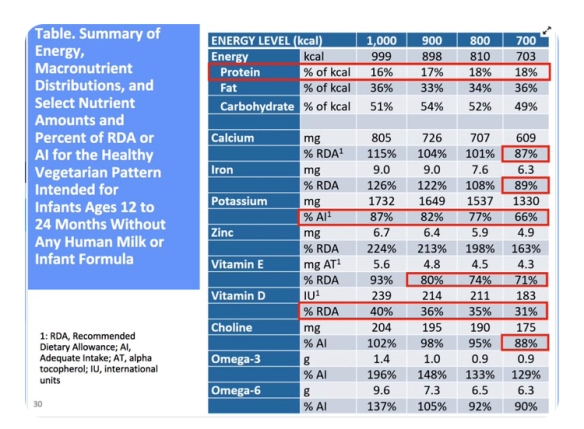 DGAC says healthy vegetarian pattern for toddlers is good to go even though it doesn’t meet their needs for essential nutrients for life. No solution was given by DGAC for this problem. Sadly, in fact, children in schools and daycares were referenced as a group that can “adhere” to the diets  due to government p.

Unfazed, the committee ignored any attempt at logic on the many questions of these diets missing quite a few “nutrients of concern.” They simply moved on… next slide.

Throughout the discussions of dietary patterns, saturated fat caps, and such, the “nutrients of concern” not being met in the food patterns — mainly fat soluble vitamins like D and A found naturally and more absorbable in whole milk vs. fat free and low fat dairy, for example — they just kept moving on in their direction away from animal foods, comforted by their cherry-picked research.  It wasn’t just vitamins D and A and iron, but also iodine, choline, B12 (in adults), potassium, and more. Throughout the daylong presentations, this problem with nutrients not being met kept cropping up for each “life stage” the DGAC was addressing. What was new this time was the addition of food patterns for pregnant and lactating women and children from birth to 24 months of age.

In a more detailed look at the report next week, a few ‘good news’ points for dairy as a food category can be shared, but this underlying avoidance of saturated fat put all things dairy squarely in the fat-free and low-fat zone, and the new and stricter recommendations for added sugars and beverage calories were another concern for children and the dairy sector. Yep, you guessed it. Coke and Pepsico will be happy as their high fructose corn syrup mixed with artificial sweetener concoctions will be looked upon favorably vs. nutrient-dense chocolate milk. (More on that next week.)

Other mentally exhausting moments occurred when subcommittees made recommendations based on limited evidence, or conversely, graded evidence as strong when it was based purely on observational studies. When these concerns were brought up, the answer was to point at the work of the 2015 DGAC that considered “so many more studies” and that the DGAC had decided at the outset to “build on the 2015 report” — more or less picking up where they left off — when it came to the question of dietary fats.

That was the ‘magic wand’ applied throughout the day.

In fact, as Nina Teicholz, author of Big Fat Surprise and founder of the Nutrition Coalition, pointed out in her blow-by-blow twitter feed throughout the day, the movement to subtly edge saturated fat caps lower happened on the very day that a major new review was published on saturated fats to the contrary. The authors of that report — unconsidered by the DGAC of course — included the chair and another member of the former 2005 DGAC.

“Their findings are quite opposite of those by the current one-sided 2020 DGAC,” wrote Teicholz.

Another eyebrow-raising moment came when the committee debated how to “harmonize” the food listings on their charts taken from studies where they had different meanings or included different foods.

Dairy was one example. Whole milk bad, fat-free good, and yet ‘milk’ as an entity showed up with so many positive influences in combined research charts (including cardiovascular disease, all cause mortality, obesity, type 2 diabetes, immune status and more). But the committee didn’t know which milk was in the study, and that distinction is important!

Similarly, they lumped red meat and processed meat together on one chart (the negatives), and then on another chart showing positives, they listed ‘lean meat’ but said they didn’t know if that category included lean red meat or just poultry and fish — even though the same chart had separated poultry and fish into their own categories!

It all seemed like nonsense the DGAC should have taken time to figure out before rushing their report to print.

Even though a letter signed by nearly 300 doctors and medical professionals, letters from dietician groups, letters from members of Congress and others had requested a delay, the DGAC was in a hurry to do the June 17 presentation. In fact, when registering to participate in the presentation online, a note was sent back stating that “this is only a draft and it will have a comment period.”

Trouble is, the expert report is now out, and it’s going to be difficult to put that jack back in the box with a 30-day or 60-day comment period after USDA and HHS formalize it — because so much science was excluded from the beginning. A do-over with a new committee is needed.

This committee took time Wednesday to explain the litany of poor reasons why favorable fat studies were excluded from their cadre. The federal staff that screened for each subcommittee went through a total of 270,000 reports and whittled it down to 1500 on all pertinent questions for this DGAC cycle. That is a story in itself because rigorous evidence was ignored in favor of “associated” studies.

Another concerning moment came early in the day’s presentations when committee members talked about promoting federal diet-tracking, biomarkers and monitoring. Americans will love that kind of intrusion. And in the course of the behavioral recommendations they made, the schoolchildren were their go-to for such monitoring. A captive group of guinea pigs!

But perhaps it was the concluding remarks Wednesday evening at 7:30 p.m. as the daylong meeting came to a close that really stood out. Chairwoman Barbara Schneeman, Ph.D. talked about the enormous task the DGAC had completed over the past 15 months. She said the committee would put its report in final form over the next two weeks, present it to USDA and HHS by the end of June and then USDA and HHS would “formulate it” into recommendations that can be posted for public comment by July 15 and they would be a done deal for implementation by the end of 2020 for the next five years.

Schneeman also went on to talk about how the government nutrition programs needed to be working on how to get more Americans “adhering to these diets”, with emphasis on restricting fat, added sugars and salt while still maintaining positive energy balance and meeting nutrient needs even though the DGAC had not even the slightest answer for the dilemma of meeting nutritient targets with these patterns and recommendations, especially for children.

The clincher. Schneeman pointed out how the COVID-19 pandemic shows just how much the current state of chronic dietary-related diseases put certain populations in the most vulnerable position for infectious diseases like Coronavirus.

But that’s okay, the reason we have an obesity and diabetes epidemic as well as other chronic conditions is because, she said “Americans have never followed our dietary guidelines.”

Begging to differ with their federal statistics, the record is clear that per-capita consumption has declined among the foods DGAC set out over the years to have Americans increasingly avoid. These chronic conditions have worsened with each 5-year cycle moving us further in the fat-free and low-fat direction. So much so, that many of us don’t even realize how we are impacted, and especially how our children are impacted. Now, even the toddlers won’t be safe.

Get involved by sending or phoning a comment to YOUR members of Congress and the Secretaries of Agriculture (USDA) and Health and Human Services (HHS) at this link https://www.nutritioncoalition.us/take-action/

Dietary Guidelines Committee must be stopped…