Should Canada make major concessions on the high tariffs on dairy imports that are part of its supply-managed dairy system? In a word: No. There is room to negotiate thresholds, but what right does the U.S. have to demand that they end a system that works for them? What right, especially as Canada has taken steps to manage how it determines quota as fat demand and protein demand are not moving together? Here’s what you won’t read elsewhere about the new Class 7 pricing and why it was implemented in Canada so that Canadian processors can use competitively-priced Canadian-produced protein solids that ride along with the now high-demand butterfat (on which their quota is based). Canada and the U.S. import and export dairy products and milk back and forth across the border with low tariffs up to a certain threshold. Perhaps, in the case of Canada, the U.S. should just reciprocate with high over-quota tariffs and tighter quota thresholds on Canadian fluid milk exports we know head south of the border. Canadian farmers have taken a step to show a willingness to be responsible in this discussion. They have moved to control their exports by reducing quota up to 3% this year after seeing 25% growth related almost exclusively to butterfat demand over the past 4 years. 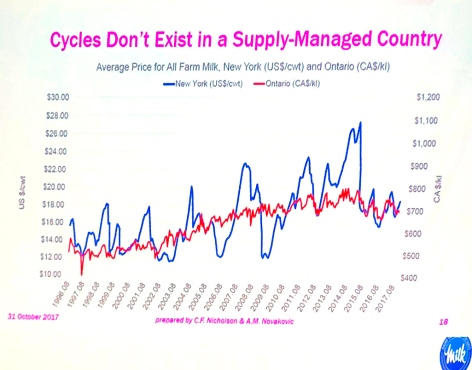 ALBANY, N.Y. — “Cycles don’t exist in a supply-managed system,” said Canadian dairy farmer Nick Thurler. He sits on the Dairy Farmers of Ontario (DFO) board and operates a dairy farm of 500 registered Holsteins with his brother and their sons. 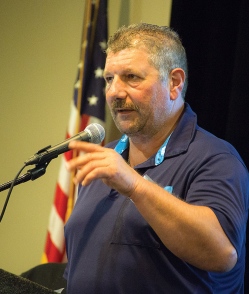 Thurler was a presenter at the Dairy Summit organized by Agri-Mark in Albany, New York on August 13. The summit gathered 350 people, half of them dairy farmers, and many of the producers in attendance being on various U.S. milk cooperative boards.

Thurler explained how the Canadian milk quota system works and some of the changes they have seen over the past three years in response to increased demand for butterfat.

He noted that the entire system is completely run by dairy farmers via provincial boards and that there are 450 processors in Canada with 80 to 85% of the country’s milk marketed to Parmalat, Saputo, Agropur, and Arla.

Thurler explained how the Canadian quota is based on kilograms of butterfat production per day.  All milk is sold to the provincial boards and they look after all the pickup and delivery of milk to the plants. 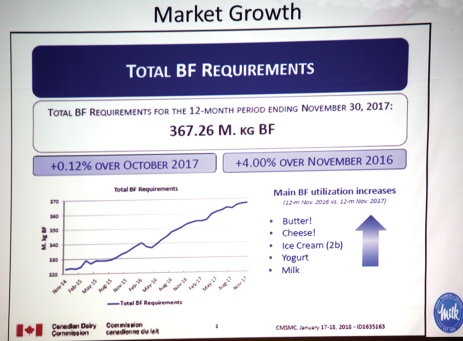 A government entity audits the processor stocks, which weighs into the market needs.

Quota value was capped some years ago at $24,000 per cow and new quota is distributed by dividing half equally over all producers and then the second half is prorated up to 10% of an individual producer’s current quota.

Meetings are held with processors and government once a year to “discuss the issues.”

The Canadian milk prices are determined with a formula that is 50% based on the change in cost of production at the farm level and 50% on the consumer price index.

Thurler said the current price to farmers stands at around $25 in U.S. dollars.

“It’s actually a little lower now because we have a little too much milk in the system,” he said, explaining that quota this year is being cut by up to 3% to balance that.

As noted around the world, demand for butterfat has increased, and since this is how Canadian quota is determined, increases in quotas continued higher over the past three to four years.

In addition, as demand for butter and cream increased, farmers became acutely aware of how their imports were increasing.

Thurler noted that when he got on the DFO board in 2014, “It drove me nuts the amount of butter we were importing.”

Canada allows imports to a certain threshold and after that, imposes high tariffs to protect its farmers. But as demand for butter increased — and Canadian farmers were just beginning to fill quota expansion to address that — U.S. processors (some of them Canadian-owned) saw the concentrated proteins product from the technology of ultrafiltered milk did not “fit” any category in the harmonized tariff schedule. Thus, the U.S. butter processors and cooperatives could, and did, export ultrafiltered milk (wet concentrated protein solids) to Canadian cheese and yogurt processors — free of tariffs.

Over the last three to four years, as Canadian dairy quota increased, producers had some difficulty keeping up with that progressive expansion of 4% per year in butterfat production, and could recoup their own previously-unfilled quota within a time frame.

These dynamics led to a combined surge in milk production in Canada coming into this year, up nearly 25% compared with four years ago.

As they were supplying more of the increased butterfat needs, they needed a market for the residual skim that was costing producers a lot in drying costs. This is why and when the Class 7 pricing was implemented to allow Canadian producers to offer skim solids associated with the butterfat demand growth their expanded quota supplies.

Under Class 7 pricing, these wet protein solids — remaining after the cream is separated — can be sold to their own processors at globally competitive prices, thereby avoiding the drying costs, and consequently at the same time, reducing the incentive for Canadian processors to import these protein solids (ultrafiltered milk) from the U.S. and other sources.

Thurler said in an interview after his presentation that it was never the intention to implement this Class 7 pricing as a tool for creating Canadian exports to compete with the U.S., but rather to align Canada’s milk production growth opportunities between producers and processors in a way that uses both the rapidly increasing demand for fat, on which their quota system is based, and the slower demand increase for skim. That pricing still uses an 83% to 17% split between domestic quota pricing and global pricing so that it still reasonably fits their supply-managed system.

Thurler had also indicated that Class 7 was put in place after a review by WTO lawyers to make sure it was compliant. Canada is allowed to export “some” dairy under its current trade agreements.

After this report was published, public statistics on global dairy trade were revealed, showing that Canada accounts for less than half of one percent of total global dairy exports.

Interestingly, the U.S. was the 3rd highest butterfat and butteroil IMPORTER after China (1) and Russia (2). The U.S. imported 12% more butterfat and butteroil than year ago in the first 6 months of 2018, and more than twice as much as Canada, at over 22,000 tons. The U.S. also ranked 4th in condensed milk imports, up 11% at 18,117 tons during the first 6 months of 2018 — particularly in the so-called ‘spring flush’ months of April, May and June.