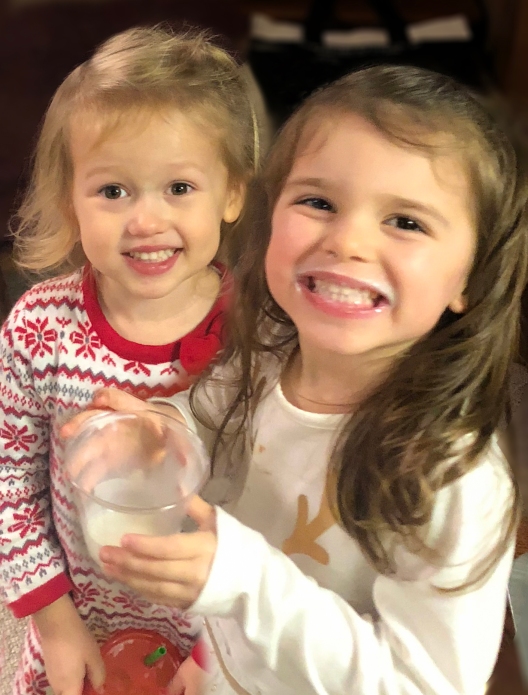 By the time these two little girls are in school, their happy smiles and enjoyment of milk will be but a memory as the low-fat and fat-free brain-washing will begin and the full-fat brain-building they get at home will come to an end. Milk will become yucky to them, and the one they get with their school lunch and/or breakfast will likely go into the trash. Such is the plight for millions of children in our schools every day over the nine years of government prohibition against whole milk. Meanwhile the weights and waste at U.S. schools are ballooning out of control.

But never fear, the government (and its NGOs) are here! Dairy checkoff’s “sustainability” partner, the World Wildlife Fund (WWF) — in cooperation with the U.S. Environmental Protection Agency (EPA) — estimates 45 million gallons of milk are discarded at U.S. schools annually. Here’s the unbelievable part: They recommend schools reduce the size of milk containers, use self-serve dispensers and end the practice of ‘serving’ milk with every meal. Yes, the dairy checkoff’s sustainability partner is recommending less milk as the solution to more waste.

Meanwhile, one school is offering whole milk on a trial basis and gathering data showing how this one small step is changing the whole story — for healthy kids and a healthy planet. We are protecting the identity of this school from the USDA school milk police because if “caught” for doing what’s right, they could lose eligibility for state and federal education funds that are tied to participation in USDA’s low-fat school lunch rules.

This amounts to an estimated 45 million gallons of milk discarded from schools annually, the report said.

A gallon of skimmed milk weighs 8.63 pounds, so 45 million gallons amounts to over 388 million pounds per year and a cumulative estimated 3.5 billion pounds of discarded school lunch skimmed milk over the past nine years since USDA removed whole and 2% milk as choices in the 100,000 schools participating in the National School Lunch Program (95% of U.S. schools).

WWF funded the study, with support from Kroger Co. Foundation and the EPA, analyzing food waste in 46 schools in nine cities across eight states.

The objectives of the WWF project were to engage students in the act of measuring waste, foster an understanding of connections between food and its environmental impacts, and “formalize how we might gather more streamlined data on cafeteria food waste,” the report explained.

In its report, WWF identifies the National School Lunch Program as “one of the most influential programs for educating youth on conservation opportunities linked to our food system.”

Waste-reducing milk strategies used, compared and suggested in the WWF report are: 1) serve smaller containers of milk, 2) educate schools to realize they are actually not required by USDA to force students to take a milk with their lunch or breakfast in the first place, and 3) invest in bulk milk dispensers so students can take only the amount of milk they will drink.

So here we go. Let the WWF / USDA / EPA / DMI ‘sustainability’ propaganda begin. The idea of milk dispensers is a good one. But, what matters more is the fat content of the milk IN the dispensers, bottles or cartons!

Of course, the report does not identify the simplest, tastiest, most nutritious and ‘sustainable’ solution: Waste could be reduced overnight if USDA would simply allow the 100,000 schools enrolled in the National School Lunch Program to put whole milk on the menu!

That’s right folks: 95% of U.S. schools are ruled by the iron-hand of the USDA milk police.

Not only are school nurses beginning to report to Farmshine that their annual student weight averages have climbed 7 to 9% in the 9 years that whole milk has been forcibly removed from school menus, one school reports it is doing its own study of student preferences and milk waste reduction this year.

We are keeping the names of the reporting schools anonymous to protect their identities from the USDA milk police.

Since September, one anonymous school’s study shows students are choosing whole milk 3 to 1 over 1% low-fat milk at the middle school and high school where the trial is being conducted.

Imagine that! Middle and high school students CHOOSING milk, and actually drinking it!

Oh, and by the way, when whole milk is used to make chocolate milk instead of using skimmed (1% or fat free) milk, less sugar is added!!

And, by the way, the data from this particular anonymous school shows that not only are their secondary students CHOOSING whole milk 3 to 1 over skimmed, the school has reduced its milk waste by 94%… in one year!

They report that their “milk not consumed” totals now average 32 ounces per day as compared with 4 gallons, or 512 ounces, per day the previous year!

Join in with those farmers and consumers asking Congress and USDA to bring back the choice of whole milk in schools. Sign the petition for choice and be part of the WHOLE solution. If you haven’t signed, you have until February 15 to do so online at this link: https://www.change.org/p/bring-whole-milk-back-to-schools

Also, to get signatures in your community, download the printable version of the petition at this link: WHOLE-MILK-IN-SCHOOL_PETITION_011520_