Over 2000 families blessed with 3600 gallons of whole milk

CHAMBERSBURG, Pa. — “Watching Franklin County help Franklin County is the best way I can summarize this. Seeing the community come together was a blessing to witness,” says Lucy Leese who helped organize the 3600-gallon Milk Drop at Franklin Feed and Supply, Chambersburg, Pa. on Saturday, May 2. Leese is the office manager for the Franklin County Farm Bureau, and she works part-time on a local dairy farm.

The idea came from dairy farmers in the county seeing other such events in Lancaster and Tioga counties. Franklin County Farm Bureau president Zach Meyers, an area feed nutritionist, was contacted about it by one of his dairy clients.

“They knew Farm Bureau could reach more people to make this work, so we helped organize it,” says Meyers. “But the farmers get the credit. They made most of the donations. With this event, they basically sent a personal message to the entire community — that dairy farmers love you and care for you.”

May 1st dawned sunny, and people were itching to get out. They came in droves for the Milk Drop, some even breaking out their restored cars for the lineup.

Organizers say some people came because of true need in these hard times, others simply to show support for the dairy industry, and others just wanting something to do — to take a drive and be part of something. Whatever the reason or season – sunshine or rain – these Whole Milk Donation Drops, Drive-throughs, Challenges, call them what you will, are really catching on and spreading all over. 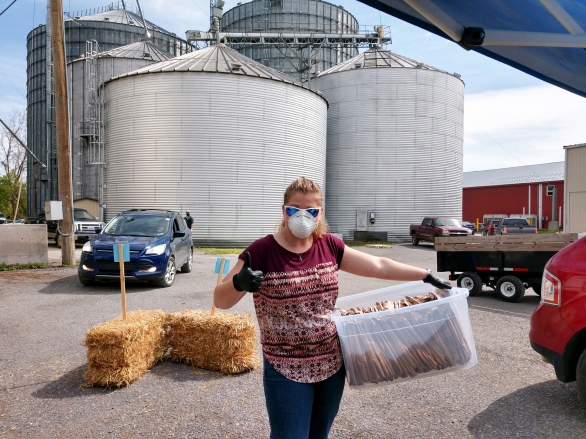 Lucy Leese works for a local dairy farm and as office manager for Franklin County Farm Bureau. Along with the whole milk, they gave out goodie bags with dairy facts, recipe and coloring books from county dairy promotion. Photos submitted

From idea to event, a whirlwind eight days transpired. Leese communicated with county Farm Bureau members and others by email and social media about the plan, and she quickly saw the high level of community interest through donation pledges as well as people expressing interest in coming out.

“We also reached out to others who have done this. Mike Sensenig (New Holland) had a lot of insight and gave us some things to think about ahead of time,” she said.

“Our biggest thought was that we wanted to be sure to use Pennsylvania milk, so we worked with Harrisburg Dairies,” Meyers relates in a Farmshine interview. “Most of the dairy farmers here are already producing milk at a significant income loss, and yet they still gave money to buy milk for the Milk Drop.”

According to Meyers, the vast majority of funds were donated by dairy farmers and supportive agribusinesses. A few donations also came from individuals and businesses with no connection.

Over 2000 vehicles, in about a five-hour time frame, snaked through the Franklin Feed property off Rte 11 into four lines on either side of two Harrisburg Dairies trucks with 30 volunteers handing out milk and a goodie bag with a dairy fact sheet, recipe book and coloring pad courtesy of Franklin County dairy promotion.

The size of the event exceeded early expectations. They initially had money pledged for 500 gallons on Sat., April 25. By Monday evening, when they had their video chat to organize the event, they had funds to buy more than 2000 gallons. By Wednesday, April 29, three days before the event, they had pledges and paypal funds for seven times the original amount and confirmed their final count with Harrisburg Dairies for Saturday morning. 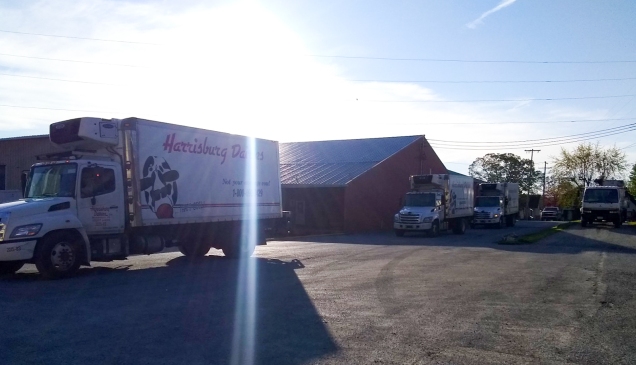 Pretty cool to see 15 tons of milk come in on three box trucks. Harrisburg Dairies sent employees to man the lifts and keep the milk moving to the distribution tables between four lines of cars.

“It was pretty cool to see 15 tons of milk come in on three box trucks,” says Leese. “Harrisburg Dairies sent their own guys to man the lifts and keep the milk moving to the distribution tables.”

The community was eager. “We had cars coming in at 7:45 a.m. right behind the trucks, so we started letting them through at 9 instead of 10,” says Leese, describing the initial rush of cars that gave way to a steady flow into the early afternoon.

In the end, Shippensburg Food Pantry sent a refrigerated truck for the 150 gallons that were left at 2:15. Earlier in the day, folks from a nursing home in Waynesboro had come through for 40 gallons. “They said they weren’t able to get whole milk, and their folks needed milk,” Leese reports.

Hearing the emotion in Leese’s voice as she described the experience in a Farmshine phone interview, it’s obvious that an event like this truly touches the givers and the receivers.

“Several times people asked for additional milk for their neighbors or grandparents. We said from the beginning all are welcome, no questions asked, because we are all in a tough situation right now,” Leese explains. 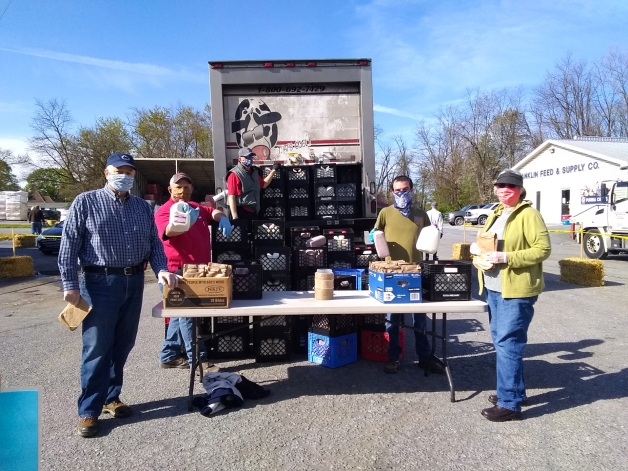 Two teams of volunteers kept milk moving from three trucks. Throughout the 5 hours, area dairy producers took shifts. For them, it was personal, to show love for their community.

“It was encouraging for us as volunteers to be able to serve and give back to the community here at a time that we have felt helpless for so many weeks. This was an opportunity to be active and to serve,” she adds. “The folks coming through were just so grateful with words of thanks and blessings, and if they could, they gave money to pay forward for other Milk Drops.”

The way the lines flowed into Franklin Feed from Rte 11 gave the event a special touch for homebound families getting out. Wide-eyed children looked around at the sights of grain bins and feed equipment and then the milk trucks as they lined up between them. 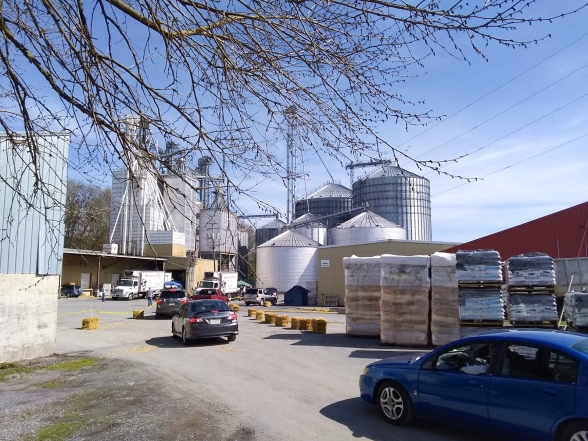 Over 2000 vehicles, in the space of five hours, filed off route 11 in Chambersburg, snaking around the grain bins at Franklin Feed and Supply before breaking into four lines on each side of two Harrisburg Dairies trucks.

“People actually thanked us for the tour,” Leese said. “We needed to move quickly so the line wouldn’t back up to route 11, so we had four lines, and the volunteers came in shifts.”

While the Franklin County Farm Bureau is not planning another, others in the community are talking about more milk drops.

“As people are seeing and recognizing the need and the positive response, the idea is really taking off,” Leese observes, adding that they’ve been contacted by their peers in Centre County wanting to do one. Also, Harrisburg Dairies has been involved in other events like this, but this was likely their largest one-day, one-location event.

“We learned that people will give whatever they can to support something like this,” she says.

Leese’s advice for others includes: Overplan your volunteers, have popup tents for shade, wear gloves and masks.

“When you are standing there giving something to people, you can still smile with your eyes and be pleasant — even wearing a mask,” says Leese.

“People have been missing interactions, so we wanted to be cheery and welcoming, and people noticed. It helps raise everyone’s spirits,” she reflects.

Leese is grateful to the dairy farmers who had the idea, the many volunteers, and to Franklin Feed and Supply for providing the accommodations and being so helpful. 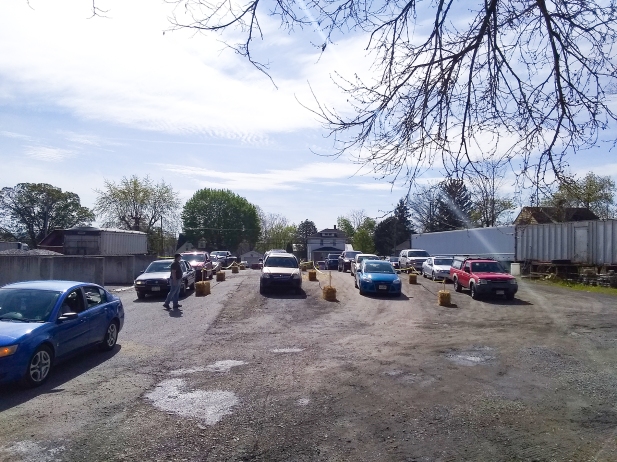 She says Farm Bureau first vice-president Ron Wenger, a dairy farmer from Pleasant Hall, was instrumental in figuring out the traffic patterns to make sure they had things flowing well.

“Coming from a farm background, working for a farm and the Farm Bureau, I know what farmers are going through, what they are facing, and it’s not pretty. Yet a portion of the donations came directly from dairy farmers, and they were out here to share and to give and to protect people. To see the community respond in such a positive way to this outpouring from the dairy farmers was gratifying.

“People understood that they were getting something good for them from farmers who care for them, so we got some kind of understanding happening here,” she observes.

“Now the question is how to hold on to that, and make it flourish.”