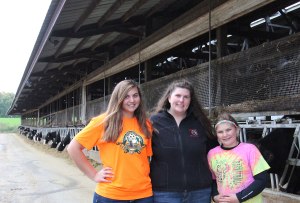 ason’s harvest to a close. It’s the month we are reminded to be thankful for God’s blessings.

In September, I met a truly inspirational dairywoman who is quietly and methodically moving forward in the face of difficult odds. She and her two daughters exemplify a thankful heart as they care for their cows, which in turn care for them.

It was a downright cold, rainy central Wisconsin day as I was visiting farms ahead of the World Dairy Expo at the end of September. My last 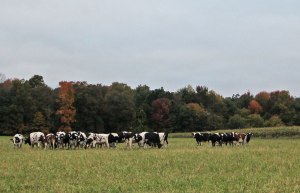 stop of the day was Milk-Flo Holsteins, New London, where Cathy Tank still does the 3 a.m. milking of her 150-cow dairy herd, and then works off the farm until supper time; so the appointed time to meet was toward evening. Her daughters were home from school and the hired man was busy pushing up feed for the cows.

What started as a typical family farm interview, soon turned into much more. By the time I left a few hours later, it was dark and one of the two ladies employed to milk the other two of the 3x milkings had arrived as Cathy’s daughters fed the chickens befo 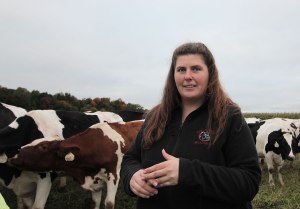 re heading inside to do homework.

A former dairy queen of Wayne County, Wisconsin, Cathy Tank is a woman who not only works hard, she believes in working smart and using the right tool for a job.

She and her daughters Elizabeth, 15, and Rebecca, 11, love the dairy farm they are keeping going — and progressing — after losing husband and father Bob Tank to melanoma in 2009. It has been a journey, to say the least, and Cathy is quick to point out the way communities and extended family work together during harvest and in times of need.

“That’s what makes farm folk different,” she says. “A farmer can be having the worst day, ever, and would still stop and help pull another out of the ditch.”

“I am fortunate to have good help,” she adds. Working smart, means picking the jobs she can and can’t do. While she harvests her own haylage and works the ground to get it ready for planting, Cathy uses custom manure hauling and custom choppers for the corn silage harvest.

“They can do in a few hours what would take me weeks,” she says, adding that her brother helps her do most of the planting. That is something her father, Keith Knapp, helped her with over the past few years, but this spring she lost her Dad, too, in an accident.

Getting on the tractor is therapeutic, she says matter-of-factly. “It is refreshing work, and it reminds me to be thankful. I think about all of the things my Dad taught me how to do.”

While fieldwork is refreshing, what Cathy really loves is the cows. The dairy herd was her domain until six years ago. One year before Bob’s illness, they decided she would take a job off the farm. Today, she continues onward with both the job and the farm, and she’s set some pretty high goals for her cows with the focus on paying down debt. She would like to see her cows get over that 90 lbs/cow/day mark into 100-lb territory. “That’s a hard goal,” she says. But she’s already reached a few toughies.

She started 3x milking in February, and over the past two years, she made a focused effort to reduce somatic cell counts. Today, the herd averages 87 pounds/cow/day with 3.5 fat and 3.9 protein and SCC ranging 100 to 150,000.

The herd cleared $1 million in milk sales last year, which was a goal, reached, and Cathy says she has been able to reduce the farm’s debt by almost half. The milk from Milk-Flo goes to a cheese plant, and so the premiums for reducing SCC have really helped the bottom line.

While shifting the farm from pasture-based to more conventional in order to increase production and pay down debt, Cathy muses that maybe one day in the future, it 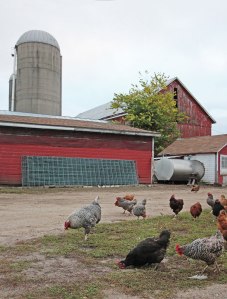 could return to more of a pasture-based system. She has already diversified a bit, adding pastured poultry and home-raised pork, beef and chicken. She and the girls sell their eggs at a local farmers’ market. The few steers on the farm are fed refusals from the milking herd and the chickens help keep some of the lawn areas mowed.

“We do what we can to not waste anything here. We are learning how to be more self-sufficient. You learn to be resourceful when you are on your own,” she says.

“We also try to do as much as we can without antibiotics,” explains Cathy, who grew up milking cows and has an Ag Education degree from the University of Wisconsin-River Falls. “We don’t sell the milk at the farmers’ market, but people who buy our eggs know we have cows, and we get those questions. We are trying to pay attention and be more preventive in how we manage the cows, so we don’t have as much need for treatments during lactation. This approach has helped us qualify for quality premiums and have a healthier herd.”

Cows are milked in a step-up parlor and housed in an open-front barn in freestalls. The farm includes 310 acres of forages for the 150-cow milking herd and young stock. Dry cows and older heifers are on pasture.

“I like color and variety,” says Cathy about the composition of the herd today, which is mainly Holstein but includes Brown Swiss crosses, Red & Whites, Linebacks, 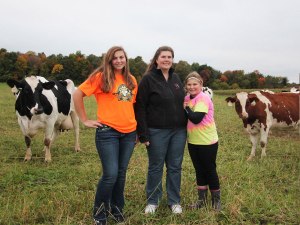 and Ayrshire crosses. She has hired a breeder but picks the bulls. The two biggest things she looks at are feet-and-legs and protein.

After two years in a row of poor forage in parts of the Upper Midwest, Cathy is thankful for this year’s good hay crop and the “jumbo corn” crop yielding over 23 tons of corn silage per acre, much of which was still ‘ripening’ in the field as the calendar headed into October.

She has put some thought into positioning the farm for alternate plans should the need arise. A few years ago, she installed a scrape alley and simple manure storage for the parlor holding area. This and the open-faced barn make the property suited to substantial heifer-raising if milking cows would ever get to be too much.

Elizabeth and Rebecca are the fourth generation on the farm. Cathy explained that Bob’s family has farmed here 100 years as of 2008, which was the year before he died.

“I’m just a steward,” she said. “I’m pretty interested in staying in this industry. I can’t imagine the farm without the cows.”

While she focuses on the areas of the farm where her efforts are most productive, she still enjoys the 3 a.m. milking. “I like getting up when it’s calm and you can see the stars,” she says as she looks around at the herd, noting her oldest cow is 15 years old. “It’s a good feeling to have dams, grand-dams and daughters in the barn here. We take care of their families and they take care of ours.” 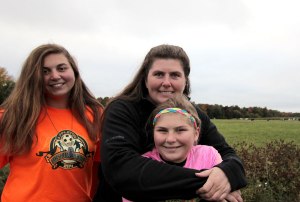