By Sherry Bunting, reprinted from Farmshine May 4, 2018

WASHINGTON, D.C. — It has been talked about for years, and the evidence has been put before USDA and the Dietary Guidelines Advisory Committee even before the 2015 cycle began, but while the caps on cholesterol were removed, freeing the egg industry to promote the healthiness of eggs, the caps on saturated fat were left where they are, despite the same body of research and investigation showing just how flawed the 30-plus years of deteriorating dietary advice were from the beginning.

Meanwhile, schoolchildren continue to be served only fat-free and lowfat milk, and this means a huge lost opportunity to serve children the best tasting best nutrition available while improving the loss of milk markets and value affecting dairy farmers across the nation.

In fact, by at least one estimate, the move by the Obama administration to reduce flavored milk from lowfat (1%) to fat-free, alone, resulted in lost sales of 288 million cartons of milk since 2014 — not to mention milk on the school lunch tray ending up in the trash.

Congressman Tom Marino, representing Pennsylvania’s 10th legislative district seeks to put an end to this loss of dairy nutrition and markets. Last Thursday, April 26, he introduced The Whole Milk Act, H.R. 5640, which was referred to the Committee on Education and Workforce. Rep. Virginia Foxx of North Carolina chairs this committee, and G.T. Thompson of Pennsylvania, who serves as vice chair of the Ag Committee, also is a member of the Education and Workforce Committee.

Rep. Thompson has a separate bill as well, which was introduced last year to codify the small administrative step taken by Secretary Sonny Perdue last fall, allowing 1% lowfat flavored milk to be served in schools instead of the previous rule of fat-free-only. Choices for white milk were already at 1%. Not much forward movement has been seen in the School Milk bill introduced by Thompson.

“Under the Obama Administration, schools participating in the National School Lunch Program were barred from selling unflavored whole milk and could only sell 1% unflavored milk,” said Rep. Marino in a statement.

“When the Obama Administration changed the National School Lunch Program to allow only 1% unflavored milk to be sold during school lunches, they claimed to be doing a service for our school children,” Marino’s statement indicated. “We saw the complete opposite, children stopped drinking milk in school, and food waste went up.”

Marino referenced the “Numerous studies that have shown consuming unflavored whole milk to be a good way to prevent childhood obesity and help your body absorb more vitamins. This bill will not only help our children get the proper nutrition they need to lead a healthy lifestyle, but will also help America’s dairy farmers who have been struggling with stagnant milk prices.  I strongly urge my colleagues in the House to support this bill.”

While this bill will not, by itself, correct the issues with milk and dairy in the National School Lunch Program, with its questionable rules on the percentage of lunch calories that are allowed to come from fat, the truth is that if this bill is taken up by the committee and is voted on, passed and signed by the President, it does send a strong message that the needle must move on this issue sooner, rather than later.

Early this week, Nina Teicholz, author of The Big Fat Surprise and founder of the Nutrition Coalition, tweeted her support for H.R. 5640.

“This bill is supported by the science!” writes Teicholz. “Never was there any science (to begin with) to show that kids should restrict their consumption of saturated fats; fats, nutrients are needed for growth.”

The Nutrition Coalition echoed, stating that H.R. 5640, The Whole Milk Act, “is supported by peer-reviewed science showing whole-fat milk is equal to or better for kids than skim.”

One thing is for sure. Whole milk tastes better. Giving schools this choice allows whole milk, at just 3.25 to 3.5% fat, or even 2% to be the more nourishing choice because it is more likely to be consumed. With better tasting milk at school and the satiety of these healthy fats, children can think better, and this would be a positive step toward turning around the epidemic of childhood obesity and diabetes. 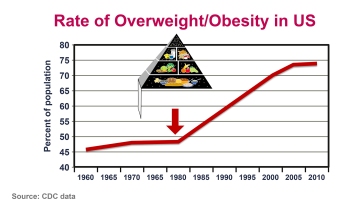 With this graph showing the rise in obesity as the Dietary Guidelines worsened from the McGovern food pyramid through today, Big Fat Surprise author Nina Teicholz told PA Dairy Summit attendees in February that this graph, itself, does not show causation, but she revealed the growing number of studies that have proved it as well.

A growing number of cardiologists are already making this recommendation to patients as the veil has been lifted to reveal that consuming fats is not what is making us fat. (See Chart 1).

Meanwhile, Teicholz shows that, “The introduction of skim milk is arguably what turned kids away from milk altogether (because it tastes bad); then kids turn to sugar-filled options instead,” she writes on Twitter. “The drop in milk consumption is driven by the decline in whole milk.” (See Chart 2).

In a separate letter to Agriculture Secretary Sonny Perdue, Rep. Marino notes that “The Healthy, Hunger-Free Kids Act of 2010 required USDA to update federal nutrition standards for school meals. This update included schools only being able to offer one cup of fat-free or I% milk. These changes have led to a decrease in milk consumption and a significant increase in food waste in schools. Additionally, these guidelines have negatively impacted America’s dairy farmers who have been suffering from low milk prices and a significant decrease in the purchase of fluid milk.”

He notes that not only is milk the number one source of 9 essential nutrients, “it also provides  significant health benefits. For instance, Conjugated Linoleic Acid (CLA), a fatty acid found in milk, has been shown to reduce the risk of cancer and is a great source of protein,” writes Marino. “Furthemore, if children do not drink milk, it is very difficult for them to get sufficient amounts of three of the four major nutrients lacking in most children’s diets: calcium, potassium, and Vitamin D.”

Marino notes that the bonus is that “increased milk sales would help America’s dairy farmers who have been impacted by stagnant milk prices.

There are several ways we can all help support Rep. Marino’s Whole Milk Act.

First, contact your cooperative board members and ask them to let National Milk Producers Federation know that the dairy producers they represent want this bill supported. Contact organizations you are a member of, including your state Farm Bureau and the American Farm Bureau Federation and state and national breed associations, for example.

Most importantly, contact your representative in the U.S. House and ask them to cosponsor and support H.R. 5640 The Whole Milk Act. If you don’t know who to call, enter your zipcode here to find out who represents you

In addition, check this link to the Education and Workforce Committee and look for members who may be from your state, contact them, and the Committee chairwoman as well. Ask them to put this bill on the committee’s agenda. Its passage must begin in this committee.

Also, write to Agriculture Secretary Sonny Perdue or contact the USDA with your support for the letter Rep. Marino has sent in conjunction with introducing H.R. 5640 The Whole Milk Act. USDA is key to making school milk great again by making it whole again.

At the Farm Bill hearing during the Pa. Farm Show in Harrisburg in January, Rep. Tom Marino was part of the panel. While he does not serve on the Ag Committee, he has attended this hearing the past two years it was held. He spoke from the heart and admitted he is not the most well-versed in agriculture and since he does not sit on the ag committee, has less influence on these things, but he said he comes home late at night from Washington and sees the lights on at the dairy farms in his district, sees the activity going on on the farms, sees what people put into producing a quality product and hears from constituents on these issues of school milk — brought up at Farm Show hearings also. He said at the 2018 hearing that he is tired of seeing things that don’t make sense and he said if the government is involved in these things, they better be getting it right or they should not be involved. Last week, Rep. Marino introduced The Whole Milk Act, H.R. 5640, to bring whole milk back to the National School Lunch Program. Photo by Sherry Bunting