Innovation in the face of disruption, that was one of the themes of the Alltech ONE Virtual Experience last week. In fact, Alltech CEO and president Dr. Mark Lyons talked about how innovation has been the driving force behind 35 years of the annual “ideas conference”.

This year, due to COVID-19 preventing the conference from happening in-person, innovation turned the ONE conference into a virtual experience for the first time with participation by over 23,000 people from 144 countries.

“We live in a time of great opportunity, we have younger people asking questions, and when farmers get those questions, they should answer them and not defer,” said Dr. Frank Mitloehner. Friday’s ONE keynote speaker.

Dr. Mitloehner is a University of California-Davis animal science professor and air quality specialist as well as world renown greenhouse gas (GHG) emissions expert. He talked on his favorite subject: “Clearing the air: Debunking the myths of agriculture.”

Mitloehner is a foremost authority on air quality emissions and how to mitigate them within the context of livestock and agriculture, and he is an integral part of a benchmarking project for the environmental footprint for livestock.

The project he deems most important of his career is “getting animal agriculture to a place where we consider it climate neutral,” he said, adding that climate was top-of-mind before COVID-19, and will be again. “There’s a lot of interest in this.”

But the path to climate neutrality begins with proper accounting for methane and how it behaves in the biogenic cycle.

“The one missing entity is the media on this,” said Mitloehner. “We are seeing a major new narrative about animal agriculture and the accurate quantifying of methane, but it is problematic that media are not reporting about it.”

Despite lack of media coverage, Mitloehner expects the new narrative to take hold.

He gave a vivid example of why accurate measurement is needed. Speaking in Ireland recently, he compared photos of the Emerald Isle to photos of Los Angeles to photos of a coal-fired power plant in Europe.

Ireland is so green, with pastures, hedges and forages everywhere, he said. But the way carbon is conventionally quantified, Ireland would have the largest carbon footprint of the three examples.

“But the change in how we perceive GHG is materializing as we speak. We have to think about methane not just produced but also degraded, and how GHG is sequestered,” Mitloehner explained. 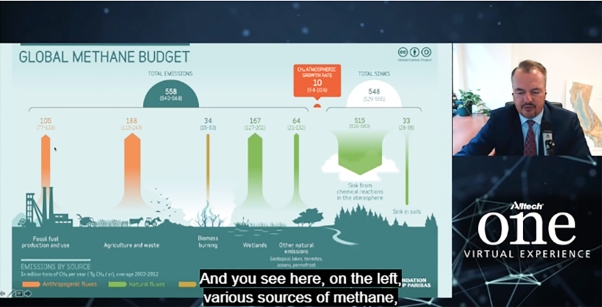 In the old way of quantifying carbon by looking at methane budgets (left side of graphic), not only are methane’s short-lived properties as a ‘flow gas’ ignored, but also the sequestration (shown on the right side) provided by agriculture and forestry as part of a biogenic cycle. Screenshot from Friday’s keynote presentation by Dr. Frank Mitloehner during Alltech’s ONE Virtual Conference.

Using the old way, “They don’t think of sectors like forestry and agriculture serving as a sink for GHG,” he said, comparing the three GHGs — carbon dioxide, methane and nitrous oxide — in terms of their heat trapping capacity.

“So they look at methane and translate it to a CO2 equivalent. That’s what people have been doing since 1990,” he said. “At that time, scientists had several footnotes and caveats, but they were cut off and people ran with the slides without the footnotes. That is a dangerous situation that has gotten animal agriculture into a lot of trouble actually.”

He explained that CO2 is a long-lived climate pollutant, whereas methane is short lived. Methane is different. Unfortunately, when methane emissions are calculated globally for sectors each year, they don’t consider the whole picture.

“If we don’t get this question right, and the livestock moves, then we have ‘leakage,’” he said. “Most people add it up and stop discussion there, but they shouldn’t. On the right side of the graph are these sinks, and they amount to a respectable total, so the net methane per year is a fraction of the total number they are using.”

Another difference is the life span of these gases. CO2 lives 1000 years, nitrous oxide hundreds of years, methane 10 years, Mitloehner explained. “The methane our cows put out will be gone after 10 years, it is produced and destroyed.”

Dr. Mark Lyons brought up all the talk about “planetary diets” and the “spin and marketing” of eating for you and the planet.

Mitloehner said “the inference of diet on environment is greatly overplayed for PR purposes. The impacts are much lower than some people say who want to sell their alternatives. If and when comparing food groups, it must be done fairly. A pound of beef has a different footprint than a pound of lettuce, but it also has a vastly different nutritional profile.”

Another example he gave was dairy vs. almond juice. “Using the old way of assessing the impact of dairy milk, it is 10 times greater, but almond juice has a 17 times greater water footprint. You can make any food shine, but drill into it and there is no silver bullet. People will continue to eat animal sourced foods and the sound argument is to allow us to produce what people need and crave in the lowest impact possible and that is the route we are going.”

The good news, he said, is that for every one vegan, there are five former vegans. The retention is not good.

He talked the virtual ONE attendees through the process of where carbon comes from and where it ends up. This is why GHG from livestock are significantly different from other sources such as fossil fuel.

Plants need sunlight, carbon in the form of CO2, which is made into carbohydrate, cellulose or starch, ingested by the cow into the rumen where some of it is converted into methane. And after a decade, that methane is converted back into CO2 needed by the plants to make carbohydrate.

“The carbon from our methane originates in the atmosphere, goes through plants, to animals, to air, and again, on repeat,” said Mitloehner.

In this biogenic cycle, if there are constant livestock herds, “then you are not adding carbon to the atmosphere, it is all recycled,” he explained. “What I’m saying here doesn’t mean methane doesn’t matter, but the question really is: Do our livestock herds add to additional methane for additional warming, and the answer is NO.”

This is a total change in the narrative around livestock, and it will be the narrative in the years to come, according to Mitloehner. Because dairy and beef herds have declined so much since the 1950s and 1970s — producing more animal protein at the same time, “We have not caused an increasing amount of carbon in the atmosphere but have decreased the amount of carbon we put in the atmosphere,” said Mitloehner.

The difference between animal agriculture and fossil fuels is a cycle vs. a one-way street.

“Each time you drive to work, you put CO2 into the atmosphere that lasts 1000 years, and it is a stock gas that adds up each day,” Mitloener said. “Everytime we put it in the atmosphere we add to the existing stock. This is why the curve always goes up, because it is a long-lived climate pollutant. Methane on the other hand is flow gas. Cows can put in the air Monday, but on Tuesday a similar amount that is put in is also being taken out. By having a constant number of cows, you are not adding methane into the atmosphere. The only time you add is throughout the first 10 years of its existence or by increasing herd size.”

He quoted researchers from Oxford University who are also communicating this science and technical papers to the public. But again, the media in general are ignoring it.

What really gets Mitloehner energized are the concepts like biogas and use of it as a renewable fuel in vehicles, for example, and other technologies where dairy and livestock operations can take their climate neutrality and turn it into a cooling effect by counteracting the warming caused by other sectors.

“The current way of accounting for it is a flawed way of looking at it, because it does not account for the fact that keeping methane stable, the amount of warming added is actually zero,” he said. And this is where to build incentive to make up for other sectors that are actively adding to the warming.

“If we were to reduce methane, we could induce cooling,” he said. “We have the ability to do that. This is how agriculture, especially animal agriculture, can be the solution to the warming caused by other sectors of the economy and life.”

Mitloehner measures to quantify the impact of mitigation technologies to see if we can get to that point of reducing other emissions. He talked about California law mandating reduction of methane by 40% by 2030.

“They’ve reduced by 20%, using the carrot instead of the stick. The state incentivizes the financing of technologies that mitigate,” said Mitloehner. “We are now at 25% of the 40% total reduction. If we can do it here, it can be done in other parts of the country and the world… and it means our livestock sector will be on the path of climate neutrality.”

If you have a ‘beef’ with GHG reporting, contact Dr. Mitloehner on Twitter. You can follow him there @GHGGuru. He urges farmers to get involved, get engaged.