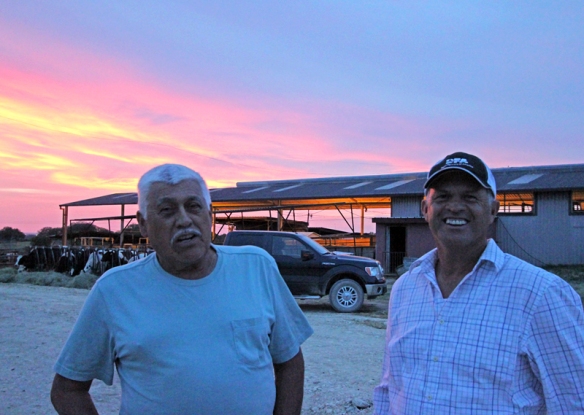 Hector Jimenez (right) and his uncle Arturo Rodriguez have been working together since the late 1970s. Two decades of saving as they worked on dairies in California led to them starting their own dairy near Dublin, Texas in 2004. In an interview last May at their R&J Dairy, they reflected on a decade of dairying on their own in Central Texas. Photo by Sherry Bunting

By Sherry Bunting, originally published in Farmshine and Texas Dairy & Ag Review during the summer of 2014

DUBLIN, Tex – The decade of 2004 to 2014 has been a volatile one for anyone starting out in the dairy business. For these two producers it took more than two decades of
work on other dairies in California to pave the way to be living their dream today in Central Texas. Hard work, disciplined saving, and hands-on management are the three keys Hector Jimenez and his uncle Arturo Rodriguez say brought them through 20-plus years of working for others and 10 years dairying on their own – including the 2009-13 era of tight to negative margins. 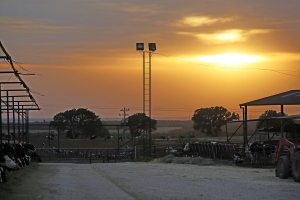 “We worked together since 1979 and always talked about one day having our own dairy,” Hector recalls. That day came in 2004 when Hector and Arturo bought a dairy near Dublin that had been vacant for a number of years after its previous owner moved west to where the dairy industry was expanding in the Panhandle.

They moved here from California with nothing, bought 110 cows and milked three months on a rented dairy, then partnered in their own R&J Dairy. They bought another 150 cows and took their time raising their own replacements to expand steadily through internal herd growth. 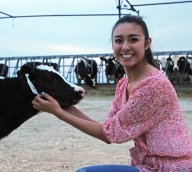 e started with No. 1 and this calf, here, is No. 2869,” Hector smiles, pointing out a newborn heifer. Today their herd of 850 milking cows is 95% homebred. They produce an average of 75 pounds/cow/day and have achieve somatic cell counts at or below 200,000.

They are satisfied with the current size of their dairy as they build back their numbers after a few years of heavier culling rates while milk margins and feed costs were tight to negative. The recent memory of 2009-13 brings daily reminders of the importance of saving, working, and being cautious.

“We culled heavily because we needed that money to pay bills,” Hector relates. Today, the herd is 30% first-calf 2-year-olds.

Asked how they made it through those tough years, Hector’s wife Fabiola said: “We prayed.”

He and Arturo are hands-on managers. “My uncle is out here feeding cows at 4 a.m. and I start at 5 a.m.,” says Hector, who does all of the breeding. His day starts with cleaning the milk tank and the parlor, checking fresh cows, and starting the day’s breeding lineup.

“My husband is in love with what he does. He never complains. He and Arturo are always here – rain or shine, good or bad — that’s how we made it this far,” Fabiola adds.

She and Arturo’s wife Sylvia — and more recently Arturo’s daughter Christian — take care of all the calves at R&J Dairy. 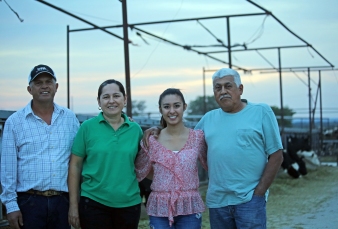 They employ 10 people, mainly milkers. They feel a sense of satisfaction in coming to the U.S. from Mexico in the mid-to-late 1970s, working hard, starting a new life here, including their own dairy business, raising children who are either interested in the dairy or working good jobs in the community, and now providing jobs for others in the community.

Halfway through their first decade in business together, Hector and Arturo hit the 2009 milk market train wreck followed by years of drought and surging feed prices. Cutting expenses was a big part of that picture from 2009-12, and the partners aren’t so fast to spend money now that dairy margins are good.

They have 220 acres and rent some additional property for growing coastal hay. That, and working with their nutritionist in feeding commodities like corn gluten, canola and cottonseed along with purchased corn silage — helps them manage feed costs. 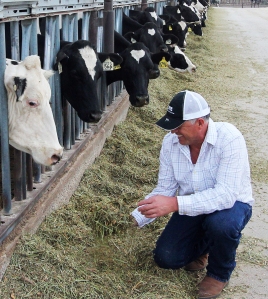 rs close to the house for observation. They also use Udder Comfort after each milking for a few days post-calving to reduce edema and improve recovery time.

The breeding program involves synchronization, but only for those cattle that are not showing heats. Hector and Arturo pick the bulls. “We look for high components – fat and protein – as well as calving ease,” Hector explains.

High components and high milk quality are two keys to making the most of their milk check in both high and low market times.

“The dairy business can be a tough business,” Arturo observes. “You have to enjoy it. I enjoy everything about it, getting up early, being out here. It’s all I’ve known since 1975.”

For the next generation of dairy producers dreaming of having their own dairies, Arturo has this advice: “Work hard, and sooner or later you will be rewarded,” he says. “Save money and invest in cows, but above all work hard. If it is work that you love, that won’t be hard.”

Those two-plus decades of hard work for other dairies have rewarded Hector and Arturo with more of the work they love, but now they do the work for their own dairy investment.

As these two partners have experienced over the past 10 years dairying on their own – “Even when you have your own business, the work doesn’t stop and in some ways you work even harder. You have to be here, work here, live here,” Arturo explains.

Hector agrees. “Even when I’m at the house, I’m thinking about the cows and wanting to see that they are okay. You have to like this job to do it well, and you have to like it even when you are losing money.” 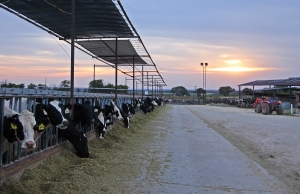 It can be done, they say, “but you have to be careful. We had to spend money carefully,” Arturo noted. “We started this dairy during the good times in 2004. We’re still here, I think, because we were careful in the good times and the bad times. We watch every day how we feed, and when the times are tough, we cut out what is too expensive. When the going gets really tough, we shift our focus into survival mode, not to how much milk we can make.”

He explains that they were fortunate to have built up some equity they could borrow on, and he estimates that another three months of milk prices as high as April’s may finally pay back what they lost in 2009.

“We try to stay ready for the next downturn,” the two men agree.

Arturo sees the new Margin Protection Program in the Farm Bill as something that will help dairy producers during future downturns. “It’s better insurance, better than the MILC program. When it gets tough in the dairy business, any help is nice to have.”

As for forward contracting, Hector and Arturo prefer to take on the risk. They believe that while the new insurance program will help and some folks have benefitted with forward contracting… nothing substitutes for hard work, saving during the good times, and close management and caution all the time.

The two partners worked day and night through the worst of 2009-10, and believe that is 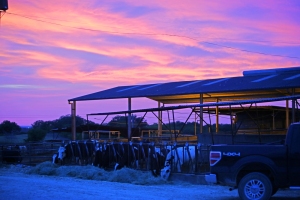 what got them through it. “We looked for those small daily victories,” Arturo reflects. “That’s what kept us going. We just kept thinking we would be okay — that if we worked hard, we would be rewarded for the years of suffering, and I guess we are seeing that right now.”