Mother’s Day is around the corner and I have 3 posts in store for you. Here is the first — an oldie but goodie and one of the most requested reprints of one of my stories in Farmshine, which ran as last year’s Mother’s Dairy feature.

By Sherry Bunting, reprinted from Farmshine May 10, 2013

COCHRANVILLE, Pa. – When Kelly King Stoltzfus wrote a letter about her mom to ABC’s “Live! with Kelly and Michael show,” she didn’t tell her mom about it because she didn’t expect her letter to get picked for the semi-finals and finals of Live’s “Search for the Unstoppable Mom” contest. After all, the show received over 20,000 letters written by children about moms nationwide!

But Mary Lou King not only made it to the final-four — which meant the show’s producers and video crew visited for two days to chronicle her life on the farm — she was ultimately voted “The Unstoppable Mom” by “Live” viewers across the country during the first week of March.

“This should really be the ‘unstoppable family’ award,” a humble Mary Lou said during a Farmshine visit to the family’s 150-cow dairy farm here in Chester County, Pennsylvania last Friday.

Along with a trophy, Neal and Mary Lou King received $100,000 for winning the contest. “We paid our taxes, gave our tithes, and the rest went to the kids,” she said.

Kelly, 22 and the oldest of the four children, is married to Kyle Stoltzfus and works as a nurse at Tel Hai in Honeybrook. Colton is out of school and works full-time on the farm. He does all the feeding for the King family’s dairy cows and youngstock, helps with milking, and crops 300 acres with his father. Kristy graduates from Octorara High School next month and starts nursing school in the fall. And Kandy, 14, was born with a mental handicap, having the brain development of a three month old child.

“We decided early-on that she would be raised here like a regular child,” Mary Lou explains.

“I think something stood out to those television producers when they read Kelly’s letter,” she adds. “They were curious about the farm when they came to do the filming and literally everything they saw here was something they had never seen before… right down to enjoying a cold glass of raw milk from the bulk tank. They swished it in their glass like they were savoring a fine wine. And they loved the peacefulness here and the wide open spaces.”

The television producers and film crew were also surprised at how much science is involved in dairy farming. Mary Lou recalls explaining what she was doing with the breeding wheel and in the pen checking tail paint. Their eyes would glaze over. “They never knew there were so many different jobs to do on a farm.”

Many portions of the letter stood out as being unique to the New York City television producers. The words “My mom has been milking the cows at 4:00 a.m. and 4:00 p.m. every day with my dad ever since they were married back in 1988,” certainly got their attention.

That, and Kelly’s description of her mother’s daily commitment to 14-year-old Kandy, who alternately dozed, then smiled a sweet and contented smile during our interview Friday at the kitchen table.

“I’m just a farm mom,” said Mary Lou, who came to represent farm moms everywhere during “Live” voting in early March. But she also struck chords with parents of children with special needs and with members of the nursing profession.

Pretty much everyone who viewed the video of life at the King farm was moved by the passion Mary Lou exudes for taking care of the cows and her family.

While Neal loves most the tractors and the fields, Mary Lou enjoys the animals. She manages the reproduction, including the breeding wheel, picking bulls, and buying semen. While son Colton now does all the breeding, Mary Lou checks cows for heat daily, and she does the herd check and ultrasounds with the veterinarian.

She doesn’t view milking as a chore. “It’s relaxing to me,” says Mary Lou. “It’s where I do my thinking.”

It’s also where she has done her listening as the children grew up. “Neal and I both appreciate our upbringing of being raised on dairy farms,” she explains. “If I’m not out there milking, I feel like I’m missing out. I’ll ask Neal what the kids talked about.”

Mary Lou’s sisters all married farmers and her brother has the home farm in Lampeter. “I look at my mom who milked until she was 50 years old. That’s my inspiration,” she said. “I saw her example and the example of Neal’s mom who passed away over a year ago, and I say to myself: ‘If they can do it, I can do it.’”

And do it, she does. After milking at 4 a.m., she cooks breakfast for the family and gets Kandy ready for the day. She’ll do herd work, book work, house work, and get dinner started before milking again at 4 p.m.  Then it’s back to the house, dinner on the table, Kandy’s needs to tend to, and leftover book work to take care of. She may get to bed by midnight and be back up at 4 a.m.

Asked what she hopes to have taught her children through she and Neal’s example on the farm? “Faith,” she said without pausing. “and the value of hard work. But what I really see them learning is to put Jesus (faith) first, family second and the farm third. I really don’t think we could farm without faith.”

“My mom and Neal’s mom both set great examples. I loved seeing their support of their husbands in working together on the farm, and at the same time I believe women can bring incomes to the family also,” she explains. “I hope I have been able to instill that love for family and for knowing that our daughter Kandy is important – just the way she is.”

Mary Lou sees the faith in farming as two-fold. On the one hand, the blessings of raising a family on the farm give opportunities to learn an abiding love for God’s creation. On the other hand, the challenges of farm life require faith as well to see things through.

“Neal and I really hope we’ve instilled in our children the values of farming, the hard work and work ethic,” she says. “We never wanted them to feel tied down, so they played sports, did 4-H and FFA, and had choices.”

In fact, the family names their registered Holsteins for what’s going on in their lives at the time. Being soccer and field hockey enthusiasts, they have cows in the herd named PIAA and Griffin. They also have cows named for other schools their school’s team has beaten or rivaled in playoffs. They have cows named for a favorite movie, actor, actress, or singer — including Pickler (as in country singer Kelly Pickler) and Pitt (as in actor Brad Pitt).

She had emailed a photo of the two calves side-by-side in the calf barn and they made the show last Wednesday as the real Ripa and Strahan read Mary Lou’s email and held up pictures of the calf, giving “Live” audiences yet another exposure to life on a family dairy farm.

As spring unfurls throughout the Chester County countryside, Neal and Colton were getting their equipment ready last week for first cutting alfalfa just around the corner. They have a high producing herd, making 95 pounds/cow/day, which they attribute to their focus on harvesting high quality forages and working with their independent Agri-Basics nutritionist Robert Davis.

“I like milking full udders,” says Mary Lou as Neal explained they feed a total mixed ration and that the ration forages are about 50/50 corn silage and alfalfa haylage. They also bale hay and grow their own soybeans for toasting. 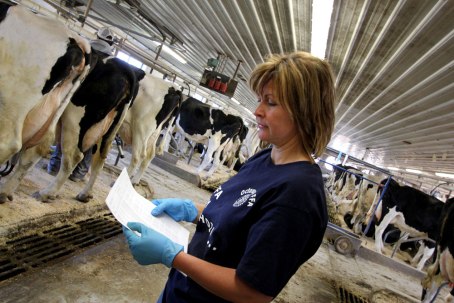 In addition to their parents’ example, Kristy says their involvement in 4-H and showing cows at the Solanco fair “made you really love the cow because when you own them, you really learn to care for them.” Sister Kelly enjoyed showing for the clipping and grooming “and making the cows really look good.”

Everyone here has a job to do. Kristy is still in school, but he helps with the afternoon milking as the designated “prepper.”

“What’s nice about living and working on a family farm is that the whole family is involved,” says Mary Lou.

“Everyone cares,” her children finish the sentence, adding that they haven’t lost a calf in three years since building the calf barn. “If any of us hears a calf cough or notices something, we’re right here to notice and we do something about it.”

Faith is also a big part of the equation in the family’s relationship and care of youngest daughter Kandy. “God has a reason for her here, a purpose. I don’t question that,” Mary Lou relates. “I know ABC had to remove some of Kelly’s references to faith and to Jesus in her original letter, but I think they could still see that what holds our family together… is faith.” 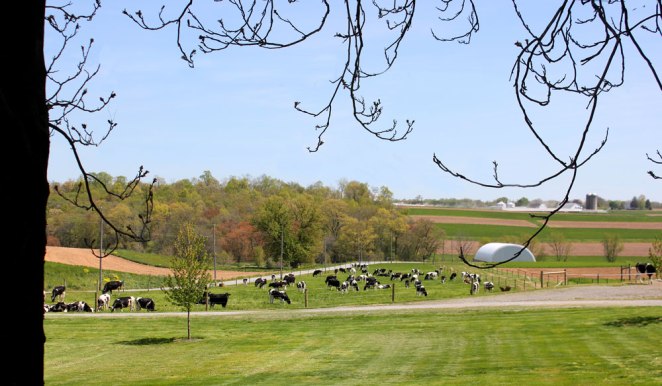 Neal and Mary Lou King with their children Kandy, 14; Kristy, 18; Kelly, 22 with husband Kyle Stoltzfus; and Colton, 20. Winning the 2013 Unstoppable Mom award from ABC’s morning show — “Live with Kelly and Michael” — left Mary Lou wanting to thank everyone from the producers of the show to the viewers who voted for her in March. But what has meant more than the grand prize is that her daughter appreciated her upbringing enough to write a letter about it. Mothers’ Day is Sunday, May 12 and this week of May 6 — 11 was National Nursing Professionals Week. Mary Lou was inspired by her own mother Evelyn Rohrer and her late mother-in-law Jeanette King to want to milk cows with her children as they grew. Milking time is family “together time.” It’s where farm moms and dads stay in touch with what’s going on in their children’s lives. Her example in the barn and as a trained nurse with daughter Kandy also inspired daughters Kelly and Kristy to go to nursing school like their mom. Photos by Sherry Bunting

Mary Lou reports the television producers of ABC’s “Live” enjoyed farm life for two days, right down to the flavor of the raw milk from the bulk tank. She sent an email of thanks last week and included a photo of the King farm’s new calves: “Ripa” and “Strahan.”

Mary Lou introduces the heifer calf “Ripa” (left) out of Rushmore and bull calf “Strahan” out of Storm. The family tends to name their registered Holsteins after the people, places and events of their lives. The calves were born soon after Mary Lou was voted The Unstoppable Mom by viewers of “Live” co-hosted by actress Kelly Ripa and hall-of-fame football player Michael Strahan.

The back porch view of dry cows grazing at the King family dairy farm. The farm, founded by Neal’s grandparents Valentine and Naomi King, and then operated by Neal’s parents Merle and Jeanette, has been in the King family for three generations. Son Colton is the fourth generation now working full-time on the farm.

Neal King took a quick break from fieldwork last Friday for a quick photo with Mary Lou. They’ve been milking cows together at the third-generation dairy farm in Chester County since 1988, and moved to the farm in 1995.

Everyone cares about the youngstock at the King family dairy farm near Cochranville, and feeding is Colton’s job. He feeds all the calves, heifers, and cows on the farm.

Mary Lou loves the cow-side of the dairy farm. She picks the bulls and manages herd health and repro. Son Colton does the actual breeding.

The Kings milk 120 cows, and base their rolling herd average on 150 cows, including dry cows. They watch the bulk tank production, which averages 95 pounds/cow/day.