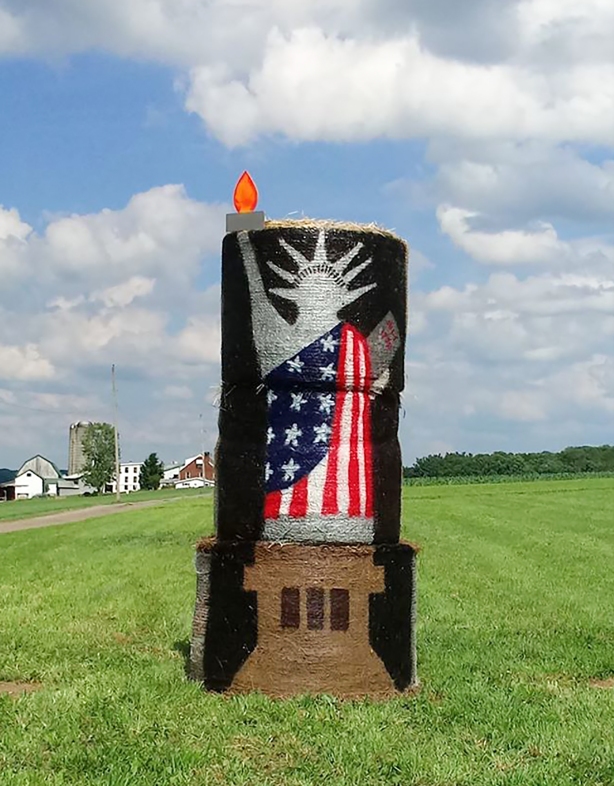 Lorraine Thiele went with the Statue of Liberty theme this week for the farm’s patriotic round bale art display ahead of July 4th. It’s attracting a lot of attention on state route 356 at the end of the farm lane just outside of Cabot, Pa. Photo by Lorraine Thiele

Round bale art gets noticed at Thiele Dairy Farm

CABOT, Pa. — The flag-draped Statue of Liberty round bale artwork at the end of the long lane leading to Thiele Dairy Farm in Butler County, Pennsylvania is attracting attention. The Thiele family placed it on their farm alongside state route 356 just outside of Cabot this week ahead of Independence Day.

“Everybody just loves it, especially in a time like this with what our country is going through, with the turmoil we are in,” says Lorraine Thiele when asked in a Farmshine interview about the community’s response. A photo of it has also created a lot of activity on the farm’s facebook page.

“We get a kick out of seeing people drive by, stop, back-up, and take their pictures with it,” she adds. “I enjoy putting a smile on someone’s face, to have something that can make people smile on their way to work or wherever they are going.”

Edward and Lorraine Thiele and their twin sons William and James farm 300 acres of corn, soybeans, hay and oats and milk 40 cows at the sixth-generation Dairy of Distinction, established in 1868. Lorraine does the bookkeeping and all the feeding. She hops on the tractor and helps with other things when needed, although she doesn’t milk much anymore.

Lorraine is also the artist behind the series of round bale portraits that have been created over the past several years. She credits her husband and sons for helping with some of the technical strategy and by providing custom-sized round bales when she asks for them.

“When Ed sees me with the skid loader stacking and piling round bales, he’ll get involved and we’ll draw it out. He likes to help with the more technical side,” she adds.

Her Statue of Liberty this year was painted on three large round bales. Last year she did just the American Flag on six. She’s been doing the round bale art projects for several years now – ranging from turkeys and pilgrims at Thanksgiving, to cows and milk jugs for June Dairy Month, and from tractors with wagons full of pumpkins in the fall, to Santa Claus, reindeer, Christmas trees (with lights) and a Nativity last Christmas. 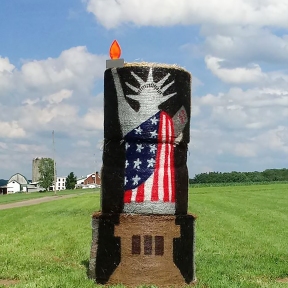 “I try to do something different every year,” she says, explaining how she “googled” for some patriotic ideas to see what struck her fancy for the 2020 July 4th rendition. She came up with the Statue of Liberty.

“I can’t do faces, so I found a silhouette for the design. I also found a ceramic statue with the flag draped over and figured I would try that.

“I’m not an artist,” Lorraine states humbly. To guide what she calls her ‘graffiti style’ spray painting, she used big baler twine pinned to the stacked bales. If her design gets too big, she tailors it down with a background color.

She admits she has been surprised by how relatively easy it is to paint round bales. Their straw bales are not plastic wrapped, so they take a lot more paint than one would imagine.

“Always buy more spray paint than you think you need,” she suggests, adding that painting it on the net-wrapped side holds the paint better than painting the face of the bale of hay or straw, which “really sucks up the paint.”

She also likes to get creative, using items that are laying around. One year, Lorraine painted wood planks in different colors for the feathers on the Thanksgiving turkey.

One year, for June Dairy Month, she used black drain tile pipe and painted the tip white for the cow tail after Ed drilled-in a rod to hold it.

Once she gets an idea in her head, and thinks about it for a while, it comes together.

“It’s fun, and something different to do. It looks harder than it really is.

“Don’t be afraid to try something,” Lorraine encourages. “The nice thing is, if it doesn’t work out, throw it in for bedding and no one will ever know!”

While the Independence Day Statue of Liberty is creating the buzz right now. It was the reaction to the June Dairy Month art that really surprised Lorraine.

For June Dairy Month, the painted milk pints had many people turning into the farm lane to buy milk, but the Thiele family explained that all of their raw milk goes to the Marburger Farm Dairy plant in Evans City — a great local brand.  Photo by Lorraine Thiele

“I painted milk chugs — chocolate and strawberry milk pints — to put beside the bale-painted cow,” she explains. “You would not believe how many people turned in the lane and came up to the farm wanting to buy milk. I never would have thought just a straw bale done up as a milk pint would do that!”

In fact, the response was so great, Lorraine had to put a post on the Thiele Dairy Farm facebook page (and a sign by the artwork), explaining that the family does not sell milk right off the farm and that their raw milk all goes to Marburger Farm Dairy in Evans City — a great local brand.

The Statue of Liberty took about a week to finish, but she only works on round bale art when she has the time. After a painting is complete, they haul it down the lane to position it by the main road. 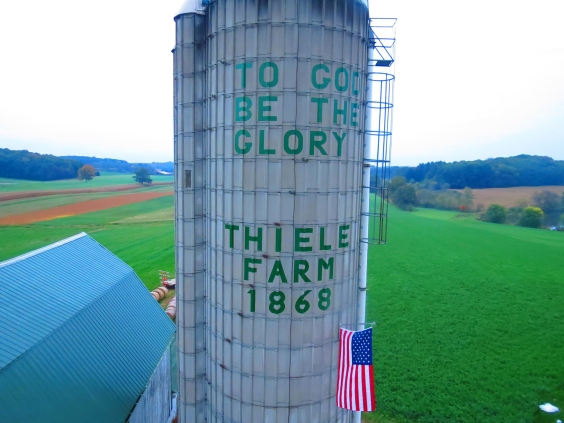 Faith, family and farming are alive and well on the Thiele family’s dairy farm.

The Thiele Dairy Farm facebook page is also something Lorraine enjoys. She started it almost 10 years ago through her love of photography and her desire to promote agriculture in a positive light.

“There’s a lot of negative out there,” she says. “Our son (William) has a drone, and he videos the baling, mowing, and planting. The average person doesn’t have a clue what we are talking about or how it is done or what is involved, so our sons love to show it, to do things like that to educate people about what we do.”

Each family member is a steadfast advocate for agriculture, and they are active in Butler County Farm Bureau and Dairy Promotion Committee. They participated in the Butler County milk donation drive-through back in April before the CFAP program. It was coordinated by Community Action Partnership with Farm Bureau, the Butler County Dairy Promotion Committee, Marburger Farm Dairy, AgCoice Farm Credit, and others, where 1200 gallons of milk were distributed along with a bag of groceries and a box of frozen products.

Lorraine is a positive person, and that was demonstrated in this interview and throughout her connections to the community in person and through social media. People appreciate it, even putting gifts or thank you notes to the family by the round bale Christmas tree at holiday time.

As difficult as things can be in the dairy business at times, Lorraine loves the farm and the cows and is thankful her family is farming together — where everyone in the family does everything on the farm.

As for the round bale art? If she can make someone else smile for even just a second. It is worth it. 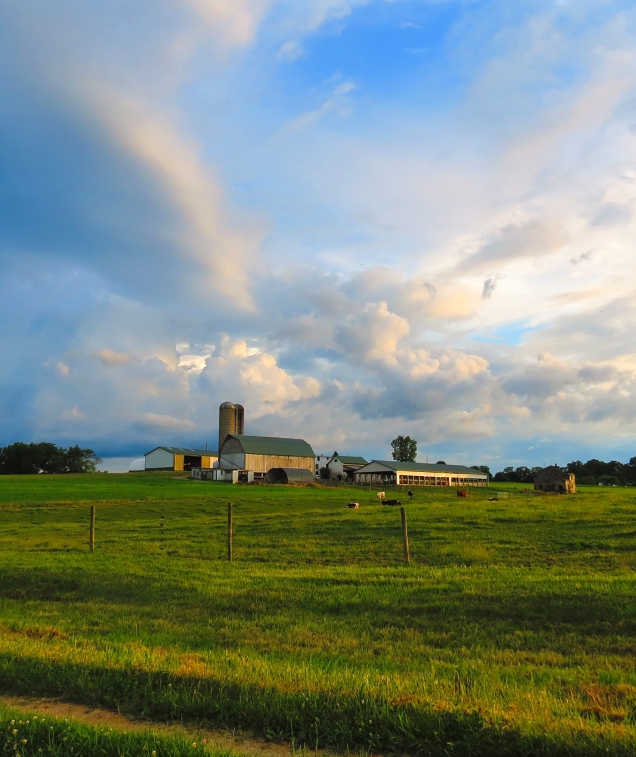 Summer sunset this week at Thiele Dairy Farm in Butler County, Pennsylvania.
Lorraine loves taking photos on the dairy farm and the Thiele Dairy Farm facebook page is full of her photos as well as drone videos by her son William.  Photo by Lorraine Thiele