If there is one thing to come down the road of recovery from a tragedy in agriculture, it is the sense of community that agriculturalists make business-as-usual. It is the matter-of-fact way in which people are prompted to help each other, and the humility with which help is offered that allows proud and self-reliant fellow farmers and ranchers to accept.

All know that livelihoods and legacies are on the line, pending the external forces that cannot be controlled, and that, in an instant, a storm, fire, or other natural disaster could change everything.

While driving through Ashland and Englewood, Kansas on Saturday heading back to Pennsylvania from other work in the Midwest, the post-wildfire realities stretched for miles.

Intermittent wheat pasture is credited with saving hundreds of lives.

It was a rain-soaked day, just what the land needs to recover. New life was springing forth, adding lushness to the intermittent wheat pastures that had provided refuge – credited with saving hundreds of human and animal lives as they interrupted the fires that spread rapidly through the dry grasslands and provided a safe haven for evacuees when roads were blocked during the fire.

Timely rains are softening the charred lands with emerging hints of green, red and gold, framing the wildfire zones as the Painter slowly re-fills this empty palette. Residents say that the rain has helped a lot, and the grasses will explode within the next two weeks in some areas. The hay being sent has been a godsend. And the move by the Trump administration to authorize emergency grazing on Conservation Reserve Program (CRP) lands located in Kansas, Oklahoma, and Texas – the three states which were most heavily impacted by ongoing wildfires – will help.

But it is the Sandhills of southwest Kansas that catch your breath. The Starbuck fire — that claimed over 500,000 of the total 711,000 acres burned in Kansas the first week of March — had burned so hot, sinking down through the sandy soil like a sponge, that many wonder if the grasslands will come back more than spotty at best in areas where windswept sand dunes present a desert-like appearance. There are areas with nothing on top, leading to lingering concerns about feeding surviving cattle.

Firefighters noted this was unlike anything they had seen in their 20 to 30 years. They described driving 60 to 70 mph, and being outrun by the fast-moving fire, seeing it move right past them.

Only time will tell how some of the acres will respond to the timely rains.

One thing is for certain, the help of fellow farmers and ranchers via donations of hay, fencing supplies, work crews, orphaned calf care, and fundraising — all of it represent blessings beyond measure. 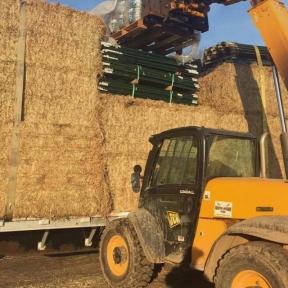 As Ashland resident Rick Preisner put it: “Everyone here was shell-shocked at first. Everything changed in an instant. It was difficult to know where to start. Then the help came pouring in and it lifted this community up.”

Ashland is ‘home’ for Roddy Strang with sister Rhonda at Gardiner Angus, where their father worked 26 years.

“No one here is saying no to the hay that’s been coming,” said Roddy Strang. “They know they will need feed for a while here.” Strang trains horses and lives in Chester County, Pennsylvania with his wife and children, but he grew up in Ashland around the Gardiner Angus Ranch, where his father worked for 26 years.

Not only did he fill his livestock trailer with 250 compact alfalfa bales and some fencing for the trip “home” to the annual Gardiner Angus production sale Saturday (April 1), he helped connect the dots for Lancaster County dairy farmer Aaron Hess of Hess Dairy in Mount Joy and his neighbor Arlyn Martin. Martin drove the 1500 miles last week with a load of 36 large square bales from Hess, along with 1800 fence posts and 91 rolls of barbed wire the men procured with funds they had raised and with many companies offering equipment and supplies free or with discounts.

They worked with Kevin Harrop, of Harrop Hay and Bale, Exton. Harrop grew up on a dairy farm and today runs a hay brokering and custom harvesting business in southeast Pennsylvania. Between Harrop and James Hicks of Meadow Springs Farm, they filled another truck with 42 large square bales. Harrop and Martin set out for Kansas early last week, delivered the hay and fencing to Ashland Cooperative Feed and Seed by Wednesday, and were home by Saturday.

For Strang, the mission was personal. He stayed for the Gardiner Angus sale Saturday, where a few cows were purchased for the return trip to Virginia.

For those involved with the donations from southeast Pennsylvania — as for the numerous others organizing convoys over the past three weeks from Ohio, Michigan, Missouri, Kentucky, Minnesota, Nebraska, Iowa, South Dakota, northwest Pennsylvania, and more — the mission to bring hay to fire-torn regions in four states was something they didn’t really think twice about. And it is something they don’t want recognition for.

The only fanfare being given to these hay donations is the sentiment of “God Bless America.” As Harrop explains it: “We saw it the Facebook posts, and we knew people out there, so we called to see what was going on and to figure out exactly what they would need,” he said in a phone call from the road last week.

Harrop put it best when he explained that people helping out do not want publicity or pats on the back for their own sakes, but they sure don’t mind if others share and publicize what they are doing for the sake of showing the world how farmers and ranchers network and move forward to get things done.

“In a small way, we just want to help keep this network going,” said Harrop. “The need is great in the wildfire zone. The mainstream media and the government are ignoring this. Farmers all over the country have responded.”

In fact, hundreds of trucks with hay and fencing and other needed supplies have poured into the affected areas of southwest Kansas, eastern Colorado and the Texas-Oklahoma Panhandle region. While some areas are saying they have enough hay, for now, southwest Kansas is particularly hard hit in this regard, and people are thankful for the trucks that continue to come – 200 of them, in fact, last Saturday, alone. The list of states represented is too numerous to be sure to acknowledge them all. Relief organizers say they have received calls from over 20 states. Plans are also underway for moving 1000 large bales that have been donated in Greene and Washington counties, Pennsylvania in the near future.

“That is their lives out there. That’s what they do, and it’s not like they have a lot to fall back on,” said Aaron Hess after securing a load of large bale hay from his dairy onto Arlyn Martin’s truck. “I was just seeing the posts on Facebook, so I called up the Ashland co-op and they put me in touch with the guy in charge. I just felt like it was the right thing to do.”

Teams of volunteers have helped remove damaged fencing. Crews, tools and materials to re-fence perimeters are the priority now.

Strang notes that the recipients are amazed by the outpouring of people wanting to come out to the middle of nowhere and help. “It is emotional,” he admitted. “There are some good people in a bad way. They aren’t going to ask for the help, but we see the need and we know if it were us, they would help.”

Even in this time when agriculture is taking such a severe economic hit, people step up. That’s how agriculture rolls.

(Above) “From the Ashes” artwork displayed Saturday by Joel Milford of Fowler, Kansas from a photo captured by Cole Gardiner as he found this cow and her newborn calf a day or two after the fire. Milford’s painting was auctioned Saturday during the Gardiner Angus production sale, raising $35,000 and prints are still being sold for $200 each to benefit the wildfire relief efforts of the Ashland Community Foundation. Nearly 100 prints have been sold thus far. To purchase a print for wildfire relief, contact Jan Endicott, at the Stockgrowers Bank in Ashland, Kansas at jan@stockgrowersbank.com or 620-635-4032. Prints are $200 plus $15 shipping and 6.5% Kansas state sales tax.

How you can help

Wildfire relief organizers are indicating that the best way for distant donors to help is to provide monetary donations for transporting nearby hay and resources to the areas affected by the wildfires.

Supplies and funding for the volunteer care of orphaned calves is also requested. Follow the progress of 4-Hers and other volunteers caring for these calves at Orphaned Calf Relief of SW Kansas.

In addition, auctions are being organized to benefit wildfire funds. For example, a heifer donated by Oklahoma West Livestock Market was auctioned 105 times on March 8 to garner $115,449 with proceeds going to the Oklahoma Cattlemen’s Foundation Fire Relief Fund. Similar ideas are creating a ripple response throughout the agriculture community and can be replicated anywhere. Visit Livestock Marketing Association  for these auction notes and efforts.

Trent Loos at Rural Route Radio is helping to organize this idea to fund the recovery and rebuilding efforts in the fire-ravaged areas of the High Plains through means of raising cash. For information about how to participate in this and to find a list of upcoming auctions, as well as how to set one up, contact Trent Loos at (515) 418-8185.

To give supplies and trucking or to donate funds to foundations for direct wildfire relief, contact the state-by-state resources below.

Several states outside of the wildfire area are organizing assistance and deliveries. Find those resources at http://www.beefusa.org/firereliefresources.aspx