Like the deeply rooted tree unleashing new blossoms of spring, Dad loved life. In his later years before the illness, he was an avid runner, taking in everything from 5k’s to marathons—even running 5 miles to work and home each day… He called running his “natural high.” 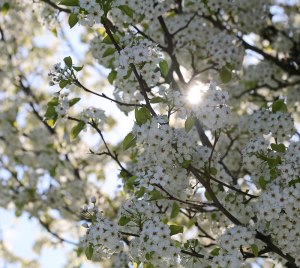 When we were growing up, Dad was the worrier, so it was surprising the way he let go of his worry and accepted my work with large animals. First it was the Vet-Science project at my 4-H leader’s farm. Then it was the work caring for camp horses and keeping them fresh with regular riding through the winter. Then it was the day I came home to tell him I took a job feeding and milking cows on a local dairy farm.

Dad didn’t understand these things that interested me, but he trusted me to do them just the same. After all, he had fostered my love for the written word and all those books were my windows to different worlds.

As a child, I devoured books about horses, cattle, the open sky. I would spend hours—whole afternoons—reading in makeshift grass forts between the greenhouses on the neighboring farm to the background buzz of grasshoppers until the evening chirp of katydid and cricket signaled it was time to walk home.

As I grew into my high school years, Dad never could understand why I would want to work on a farm milking cows or why I took so much of the money I earned through that hard work to buy and board and feed and shoe a horse.

He worked as a job foreman in the printing industry for RR Donnelly, where he started at age 16. It was his hope that we would all go to college and become ‘something more’ as he would say it.

But to me, my Dad was the king of adventures. He was the purveyor of the written word. He ran the presses, then planned the work that went onto them. He brought home magazines and books. He drove us to the library often. He would take us to work sometimes in the evening where we could look through the press over-runs for pictures and posters and covers. Indelible were the smell of the ink and the crisp feel of freshly printed pages. I always looked for the animals. My brother was thrilled with the baseball programs. RR Donnelley printed for the New York Yankees and that, of course, was my Dad’s favorite team.

Dad wanted us to be independent thinkers, and yet, my level of independence flustered him at times.

“You should be saving for college not that horse,” he would say as I worked 2 jobs—milking morning and afternoon and then selling shoes at a nearby department store in the evenings. Every free moment was spent at the farm where I boarded my horse, so I was rarely home.

But there came a point in time when his ways won out because I worked so much I had no time for the horse. Little did I know that what I learned through those early choices would shape my future.

I began to write more. I had whole journals of landscape poetry. I took my camera with me everywhere.

Before I had my license, it was my Dad who drove me most places. He didn’t understand my choices, but he enabled and facilitated them just the same. He always asked to read what I had written. Often I showed him… but not always.

And so, my work on the farm and love of writing converged. I think back on how Dad had ideals of what he wanted me to pursue, but supported my choices and allowed me to grow the path of my choosing.

He was the full tree of knowledge. The gnarled branches reached out an invitation to climb, and when I was weary, a sheltering refuge.

Years later, when my own children were small and I was between newspaper jobs, I worked as a temp in my father’s department at RR Donnelley. It was extra money we needed, and I could work my own hours—even nights—to save paying a sitter. I would see him from time to time in his work-a-day world, and I grew to know him differently. I felt a kind of sadness as digital technologies made parts of his work obsolete. But he was happy about the progress, excited to see change. He embraced it nonetheless.

Until the illness began—nearly imperceptible at first— like a late summer tree whose leaves begin to turn and before they can crumble and fall away, are blanketed by an unexpected autumn snow, falling before its time.

Even after the brain illness claimed his ability to walk and talk, he was interested in the world around him and how we had grown to find our place in it. Dad always believed he would get better, but he didn’t.

In those last few years, I was back at the newspaper and we had added a new monthly livestock edition to the weekly market report. It was printed in color. How his face would beam when I’d bring him a copy. Dementia was setting in, but he fought with all he had to hold it back. I asked him to help with the mailing at that time, and from his wheel chair, Dad would help me apply the address labels—a rote activity that he accepted as a blessing—a feeling of worth in his final days. We worked quietly.

This father’s day I thought back to how different my life might be if my Dad had not let me go; and I remember how hard it was that day before Christmas when we made the tough choice to honor his wishes to stop the machines and let him go.

That day was sunless, until evening, when light broke through the feathering clouds to reveal cold, bare branches—awaiting new life. 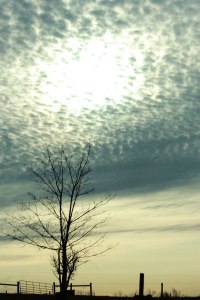