Production reduction and milk disposal were top-of-mind in a Center for Dairy Excellence industry call last week. Dr. Mike Van Amburgh of Cornell had advice for those dairy producers facing this impact of COVID-19 market disruptions.

First and foremost, know what your cooperative is actually requiring and what the penalties are and the time frame. Producers should not assume a production cut of 10 to 15% in the next two to four months unless they have received a letter from the buyer of their milk.

Do the math for your herd. “What is the actual penalty for milk shipped over the new base? Figure out how much milk you have to divert. Calculate the pounds and the deduction and spread that over all the milk produced. What does this do to the income average?” The math is important because, he said, “you don’t want to do things that damage the herd’s ability to make milk in the future.” 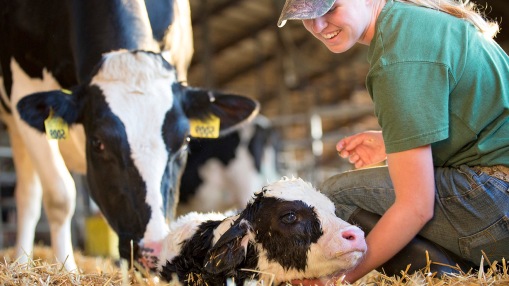 Prioritize cow health, and “avoid strategies that truly damage the ability of your cows to produce milk,” he said. “You don’t want to make decisions that cost you more in the end.”

Go through your records, Van Amburgh advised. If a 10 to 15% reduction is specifically required for your market, set priorities.

Be methodical, not abrupt, he stressed.

Once you determine pounds of reduction to target, Van Amburgh gave these recommendations in order of priority:

1) Dry off cows: “Look first at which cows could be dried off earlier, and do the math on those pounds and percentages.”

2) Cull cows that are not paying their way. “Don’t cull too hard, be methodical,” said Van Amburgh. Even if the beef market doesn’t pay well with plant closures and disruptions, cull the cows that are costing you money and will cost you even more money when over-base penalties kick-in for those producers who have received letters.

He advised culling cows not bred and longer in milk and cows that have a history of milk quality and udder health issues.

Cull the cows that will leave your herd in a better position to bounce back in the future, and cull the problem animals that require more time and labor or have issues with health and quality.  Refine the herd for high quality milk and to have fewer health problems that drain labor resources. High quality milk is an insurance policy in a selective market.

3) Pen cows over 200 DIM separately and adjust. These are the cows to make adjustments with to slow down by feeding differently or milking 2x instead of 3x.

Check your forage inventory to be sure you have enough to do this: Van Amburgh suggests raising NDF levels on later lactation cows. Go back to the basics — 34 to 38% NDF diets are the best way to back off production, he said. To keep the rumen and the cow healthy, bring forage up to 45 to 50%, then 65 to 70%, and pull starch accordingly to slow those later lactation cows down.

By making a group of later lactation cows and pulling back toward earlier dry-off over the next 120 days — load more forage, balance protein and amino acids and pull back on starch, “you can titrate some of that milk down,” said Van Amburgh.

The key, he said, is good NDF management because it is important to manage this strategy so these later lactation cows do not get fat to avoid metabolic issues when they calve back in.

4) Focus on health when evaluating strategies and additives. Don’t just take a lot of the extras out, but do it in a way that makes feeding a less expensive but keeps them in good health, said Van Amburgh.

5) When lowering production, keep the butterfat. This helps keep the income from deflating.

6) Feed saleable milk. “One easy way to divert milk is to feed all the calves some of the salable milk,” he said. “Feeding milk to cows or heifers is also a strategy, and we have some Cornell Pro Dairy bulletins on that.”

Van Amburgh reminded producers that feeding milk to older animals creates a little more work than feeding whey. Work with your nutritionist to see if it it’s doable.

7) Add more forage and pull back starch. “It is crucial to focus on maintaining rumen health,” he said. “It’s important to compare how much this pullback will cost you vs. what the penalties are if you don’t divert all the milk you are being asked to divert. Weigh those dollars and consider the longer-term impacts. As the market adjusts, will your herd be positioned to be healthy and productive for future cash-flow opportunities?

Van Amburgh said the Cornell Pro Dairy team is providing diet and management considerations in an effort to help dairy producers and their advisors meet the request, while maintaining cow health and working to ensure capacity to resume normal milk production relatively quickly once the situation stabilizes.

A question asked on the call was: If dairy farmers reduce their milk production with nutritional measures now, what steps can they take to come back four months from now as conditions change?

This question shows the importance of thinking through how you are going to reduce production and weigh into that decision what the market conditions might be four months from now.

“The key to the answer is the four months,” said Van Amburgh. “That’s 120 days. If you are looking at a 365 or 305 day lactation, you aren’t going to be ramping back up that part of the herd in late lactation four months from now.”

“It’s algebra and biology,” said Van Amburgh. “Yes it is possible, but first sit down and really look at these cows. The last thing you want to do is damage high production cows up front.”

He noted that Cornell is working with herds in New York that if they can’t afford to send that extra milk at a severe discount, take a step by step process for reducing it instead of the knee-jerk reaction of pulling everything out of the program. 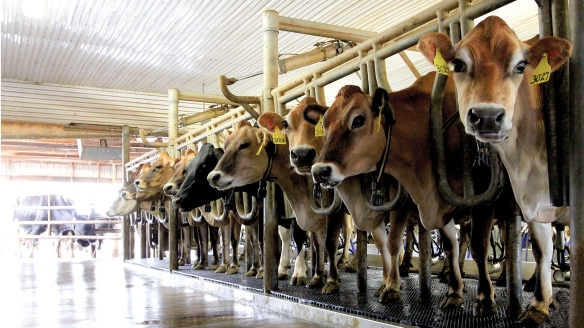 8) Going from 3x to 2x milking is the last thing to consider, according to Van Amburgh. That is, unless there are acute labor considerations in the mix. Either way, Van Amburgh advised doing this strategically.

“Weigh this carefully,” he said. “Don’t do it at peak milk. If you are a 3x herd, a smarter strategy is to go to 2x on tail-enders, especially as you move them toward being candidates for an earlier dry-off.”

He said the other group to potentially target for 2x is fresh cows up to 21 days.

These considerations may fit management for some but not all dairies. Every operation will have to determine what might work best for them under their current management conditions. More on this can be found here.

Producers also wondered what they can do privately with milk needing diverted. The answer to this question varies. Robert Barley from the Pa. Milk Marketing Board was on the call, and he said there are no government entities requiring producers to cut production. This means that a producer’s cooperative is best to answer the question about other uses for diverted milk, and the answers may vary.

Producers can also talk with their cooperatives about appropriate donation channels.

On the regulatory side, selling raw milk to consumers is prohibited by most cooperatives, but where it is allowed, producers would have to obtain a raw milk license from their state department of agriculture, and only some states allow the sale of raw milk with a license.

Excess milk can be fed to other livestock on your own farm without a permit. But if it goes into commerce to another operation, it probably needs a permit as it would be identified as commercial feed. Check with your state’s ag department or bureau of plant industry.