Author’s note: There are so many examples of farmers and communities coming together throughout the U.S. to bless one another with nourishment for body and soul during this pandemic. Here is another great story about a grassroots whole milk giveaway in Lancaster, Pa.

LANCASTER, Pa. — It poured raindrops and milk blessings Saturday, May 22 as the wet weather was no obstacle for volunteers working the Lancaster Whole Milk Giveaway Community Support Event.

They gave away 9,296 gallons of fresh whole milk during a scheduled five-hour drive-through distribution that began early when cars started lining up three hours ahead of time.

CK Manufacturing hosted the event in their parking lot just south of Lancaster in Pequea Township, Pennsylvania, where two refrigerated trailers of milk were parked to serve two lines of cars flowing through in two directions.

Organizers said the event was planned to “demonstrate God’s love in support of those in need in our local communities and on our farms in this time of hardship.”

“It is just amazing how much support is out there for the farming community and how many people are in need and want whole milk,” says David Miller about the event he was instrumental in organizing with the help of others. “I had to do something. I had this urge to make something like this happen, and it is unbelievable how it all worked out.”

A member of Lancaster County’s Amish community, Miller works for CK Manufacturing, maker of dairy replacement stalls and other cattle equipment. One of the first people Miller got involved in the idea was the company’s owner Chris King.

“Chris was very supportive, so we pushed forward with it. We wanted to target this to benefit people living in Lancaster city, and our location just outside of town was perfect for that,” Miller relates. “Chris got the Pequea Township Police and New Danville Fire Police involved because we have a lot of traffic on this road, and we wanted to be prepared and to do it right. They were all very supportive and encouraging of what we were doing.”

Miller also got in touch with Amos Zimmerman of Dairy Pricing Association. “Amos mentioned it on Dairy Pricing’s Monday night call,” says Miller. “As people were hearing about it, many were asking how they could help. It’s unbelievable how fast it came together and how much support is out there to do this.”

They set up a donation account, so other local businesses and individuals could contribute to help purchase the milk. And a nice surprise on the day of the event, some families gave money to pay-forward to help fund future milk donation events.

Initially, Miller contacted Pioneer Milk Producers Cooperative, a relatively new cooperative made up of mostly Lancaster and Chester County dairy producers. He says they were glad to provide a load of milk, and they had Hy-Point in Delaware bottle it.

The event was advertised in the local paper and on social media, as well as being publicized on the 97 Milk facebook page and twitter.

When the views and comments on social media began growing, Miller realized 5000 gallons would not be enough, so 4000 additional gallons were ordered from Clover Farms Dairy in Reading, Pa.

“We knew a week ahead that one load was not going to reach around because they were telling us it had over 25,000 views on facebook, which was rather dumbfounding to me,” Miller reports. “Hy-Point couldn’t do a second load that day, so we went to Clover because that’s local milk too.”

Miller says he was moved to initiate the planning for a milk purchase and giveaway because he knew a lot of milk was being dumped and that people were out of work. He had been watching what others were doing, and he spoke with Mike Sensenig of Sensenig’s Feed Mill for some ideas from their drive-through in April.

“I told everyone from the beginning that if we do this, it’s got to be local whole milk,” Miller says. Those two criteria were also important to the families who came.

Zimmerman reports that many people driving through asked if the milk was whole milk and if it was local. “It felt good to answer ‘yes’ to both questions,” he confirms. 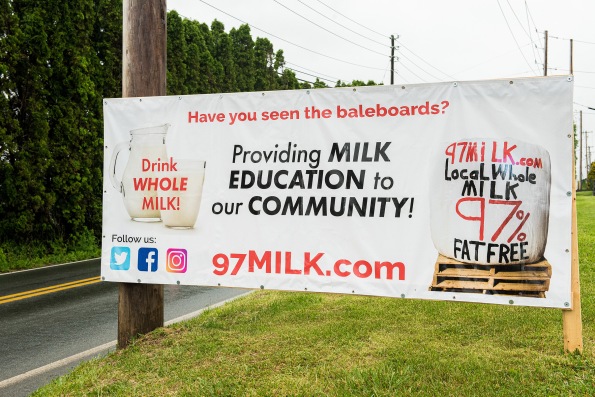 Miller wanted to provide education about whole milk at the same time, and he knew about 97 Milk and the whole milk flyers Sensenigs had handed out. So, he reached out to GN Hursh, president of 97 Milk LLC board. 97 Milk is a nationwide grassroots effort run by volunteers and donations and founded by dairy farmers in Lancaster and neighboring counties with other areas interested in starting chapters.

Hursh put up some banners and brought handouts.

(In fact, 97 Milk recently revamped the website at 97milk.com  to include a new online store where educational materials can be directly purchased, along with other promotional items.)

Among the volunteers for the Lancaster event were Cassidy Kuhl, Pa. Mrs. Agriculture USA and her sister-in-law Rebecca, Pa. Teen Miss Agriculture USA. They were all smiles handing out gallons and educational materials.

“This was a great opportunity to be a part of because this is my community we were serving,” said Cassidy. “I was excited to see so many people come for milk and take extra to pass on to their friends, families and neighbors. It felt good.”

From the comments on facebook, it is obvious this meant a lot to the community as well.

“There were smiles all day long, and some neat stories about people coming in and getting decent quantities to go out and deliver whole milk to people in the inner city – reaching out to people beyond what we were doing,” adds Miller.

Truly representing the Lancaster community, organizers said the volunteers who showed up to hand out milk included about half from the Amish community and half from the ‘English’ community.

The help of the fire police was appreciated as the traffic flowed steadily all afternoon and into the evening, and the timing was perfect for the volume of milk. Volunteers report that the last gallon was given right at 7:00 p.m.

To get this together within less than two weeks, and to see this kind of local response has many calling the event an answered prayer, a true farm-city event and a real blessing shared by all in the midst of very challenging times.